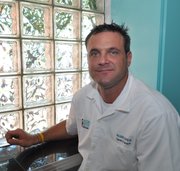 The culinary field is one of the oldest on earth—after all, since mankind has existed, we have been eating—yet it is still ever-evolving. One of the major ways chefs keep their skills knife-sharp is by working with other culinary minds, teaching and learning from them.

• Cleveland, Miss: Chef Jon Currence and Chef David Cruz—Emerson threw a dinner with Currance, Cruz and others from the state.

• Memphis, Tenn: Chef Kelly English—Emerson worked with English and other chefs from all over the South for a fundraiser for the Le Bonheur Children's Hospital.

• Birmingham, Ala.: Chef Chris Hastings—Hastings owns the Hot and Hot Fish Club and won a James Beard award this year.

• Atlanta, Ga.: Chef Kevin Rathbun—Emerson previously worked for Rathbun, who has three restaurants with a fourth on the way, and has been on "Iron Chef America."

• Washington, D.C.: Heart's Delight benefit—Emerson cooked with several chefs from across the country at the benefit.

• New York City, NY: International Chefs Congress—Emerson regularly visits the ICC to hang out with chefs from around the country.