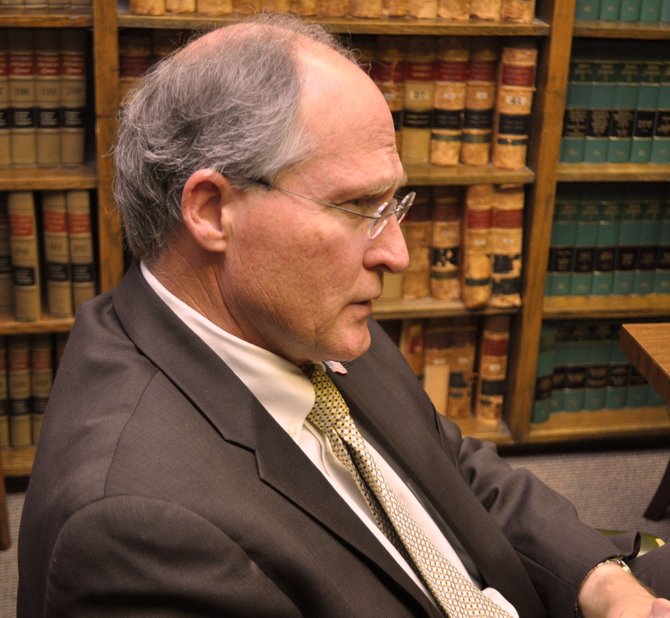 The race for Position 1 on the Mississippi State Supreme Court for the Central District has become unexpectedly contentious as Election Day nears. Earle S. Banks Sr., a Democratic lawmaker from Jackson, has been stepping up his attacks against the incumbent, Chief Justice William "Bill" Waller Jr.

Banks accuses Waller of violating judicial campaign rules that prohibit judge candidates from being involved in political fundraising or knowing the names of their campaign contributors by pointing to a September $250-per-couple reception for Waller at the Eastover home of Robert Lampton, an executive with petroleum production manufacturer Ergon Inc. Banks charged that Waller looked at the donor list for the event, which is verboten under judicial campaign ethics rules.

Waller flatly denies Banks' accusation. "I did not. I don't know where he got that information, but I have not," Waller told the Jackson Free Press.

As chief justice, Waller oversees the entire state court system. Waller, who joined the court in 1996 and is the son of Democratic Gov. William Waller Sr., who died in 2011, touts leading the court through several rounds of tough budget cuts, implementing a statewide electronic-filing system and using drug courts to save the state millions of dollars as among the highlights of his tenure.

Waller reflected on his experience on the Court and talked about Mississippi's election system during a recent interview.

Your challenger, Rep. (Earle S.) Banks, has said that the court hasn't always been fair under your chief justiceship. Another common criticism of the court is that it tends to be pro-business. Could you speak to that?

My opinions are out there if (Banks) or anyone wants to challenge whatever I did, but I don't have an agenda. There's no group that I'm trying to promote or trying to help. I think the courts should be fair to everyone who comes in them and that's whether it's an individual or a company or whoever's before the court. Everyone has the same playing field. Everyone has the same opportunity to present their case.

Banks made a lot of hay about your campaign contributions with much of your support coming from political action committees. How do you, as a sitting justice, make the case to the people of Mississippi that your thinking isn't colored by people who contribute to your campaign?

I am pleased with anyone that wants to support a fair judiciary that is efficient that is independent. If people want to support that, I want their contributions. As long as the contributions are legal--which there's never been a question about any of my contributions--they're all legal or my instructions to my committee would be not to accept any.

If you were King of the Universe, would you keep the system in place of judges having to run or replace it with something else?

Everyone is elected in Mississippi. Thirty-five states elect judges the way we do, including New York and California. The important thing about elections is that there is accountability, and I think that's important. No one is above the law. It's an open question whether we should seek to see a retention election (a system in which judges are appointed, but periodically subject to a voter referendum on whether to keep or remove the judge) like in Missouri, but there's politics in that.

I'm going to wait until after this election to see whether I support this system or seek something different or some modification of it. There's politics in everything. I think there might be more politics in appointments than there are in elections.

Why are drug courts something you feel passionately about?

I'm very interested in drug courts. This was an alternative sentencing that was developed by judges about 12 years ago. This is a judge-run, judge-conceived and judge-carried-out initiative.

A defendant charged with a felony and, first, he or she has to plead guilty to the offense. They have to comply with the program and, if they don't, they're sentenced as a traditional offender. They're placed into treatment. They're required to have jobs. They're, in many cases, electronically monitored or virtually imprisoned so we know where they are, what they're doing.

There are a lot of good benefits from it. One is that the electronic monitoring, which cost $1,600, $1,700 a year including drug tests that's paid by the people using the system versus $15,000. We've got 3,000 (people) in the program and we're projecting savings up to $36 million to the state this year.

To give you some idea of how much money that is, (the court system's) appropriation from the Legislature is in that range.

What happens if they don't pay?

If they don't meet the conditions of the program then they have to go to jail and maybe sentenced to additional service than they could be sentenced under the original charged they pleaded guilty to.

Of all your opinions, what were some of the memorable or challenging?

They're all challenging. I was thinking of one out of Oktibbeha County. Tyler Edmonds vs. State (of Mississippi), a 13-year-old charged with capital murder. ... We believed that Tyler did not get a fair trial. On remand, he was acquitted.

The pardon case, involving Gov. Barbour's pardon of over 200 defendants. I disagreed with the majority, which contended that we could not go back and look at what they considered a facially valid pardon.

Why do you deserve another term?

I've been on the court for 15 years. The last three years I've been chief justice, and we've had some tremendous challenges securing enough funding for minimal operations of the courts. I have led some administrative efforts that I think have been positive for the citizens for the court system.

I have over 500 opinions out there. It's all there for anyone to look at it. It's free. It's fair. I think the opinions have been good.

Where did Banks get the idea that Waller looked at his donor list? From Waller's own words.

Waller personally attended the fundraiser in question, which charged $250/couple admission, and admits that he looked over the invitation and host list.

Waller: "I did not see the invitation until I actually got there." Reporter: "So is it a violation for you to see who contributed to your campaign? I'm asking." Waller: "I should not look at that, that's correct." Reporter: "Have you ever looked at it?" Waller: "I have glanced at who the hosts were. "

Thanks, Atlee. I asked the editors to make sure this was included as it's an important piece of the puzzle, but it slipped through somehow. I appreciate your posting it.

Atlee has her facts wrong. It is not illegal for a candidate to attend a fundraiser or to know who the hosts are. It is only illegal to know the amount of contributions, which Justice Waller has never done or said he has done. Atlee is misconstruing plain facts because of her personal opinion.

msdowntown, obviously Waller knew the fundraiser cost $250 a couple. See above. So if he looked at the names, he knows what they paid. At a minimum. You can't tell me that doesn't violate at least the spirit of the law against judicial candidates knows who gave what to them. Let's use our heads here.

I'm guessing you're defending this based on your own agenda (or position?). How is that better than Atlee pointing out a problem?

If it's not a violation, why did Waller himself admit in that WJTV interview that it was a violation, and that he should not have looked at the invitation at all?

The problem isn't just that the invitation lists the donor, but that it lists the contribution amount right on the front. Therefore, Waller knows that everyone on the host list, and every single person he meets at the fundraiser, has donated at least $250. Some may have given more, and maybe a few were invited to come without a donation, but you can and should make the assumption that they've all given $250.

I file campaign-finance reports too -- not judicial, but I still have to follow many of the same rules such as itemizing contributions. Contribution knowledge isn't a problem for PACs, but I'd still be required to treat all attendees from such a fundraiser as donors and assume they contributed at the $250 level. For example, I would be obligated to assume that all attendees have crossed the $200 threshold, and make sure I've got everyone's contribution amount and itemizing info logged. I would potentially be liable if I didn't, because I should assume all of them are itemizable donations.

It's not just personal opinion. I obviously don't like Waller's record on personhood, but I do try to be impartial, and I actually care a lot about campaign finance. I work awfully hard to try and follow the campaign finance rules myself, and it ticks me off to see other people violating them.

She also uses her real name when she supports positions and expresses her opinion. Just sayin'.