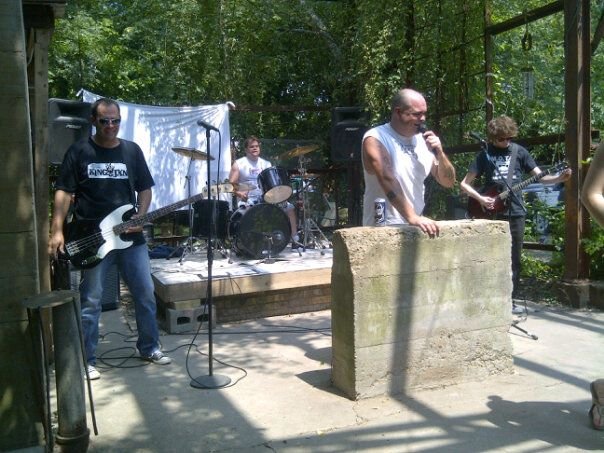 Having only been together for seven months, Supercrush is making a name in Jackson. The band consists of Jacksonians vocalist Murph Caicedo, 33, bassist Curt Thomas, 40, guitarist Brad Walker, 35, drummer Kelly Powell, 40, and guitarist Adam Bloodbird Herrington, 31.

Supercrush's sound is fast punk rock that is to the point. "Our longest song is two minutes and 30 seconds, and our shortest song is 10 seconds," Caicedo says.

Life has been the band's biggest inspiration and Caicedo says the band members strive to make their lyrics very personal.

The band recently released its first album, "1MinutetoNothin," which it recorded in one day in August at Morningbell Records & Studios. The album is about being in a transitional period and how each individual rebuilds his or her life. "Everybody in the band at the same time lost someone like a significant other whether it be a divorce or whatever," Caicedo says. "Because this happened, it's a lot of pouring of the heart into songs ... Everyone is emotionally involved."

"We've gotten real positive support," Caicedo says about Supercrush's debut album. The band has become an outlet for all members to just get things off their chests. A fan favorite on their album is the break-up song, "Headache."

The band members love what they do. "We don't do this for money," Caicedo says. "We'll play in the biggest venue or your living room if you let us." The band plays at local venues around Jackson and performed at Dragon's Den in New Orleans this past August.