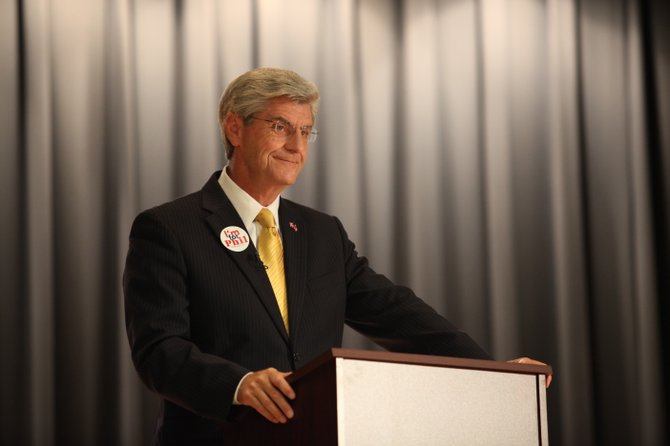 Gov. Phil Bryant signed Mississippi onto a federal lawsuit against the Department of Homeland Security over the president's recent decision to stop deporting young undocumented immigrants living in the U.S.

Mississippi is the first state to sign onto the lawsuit filed in August on behalf of 10 U.S. Immigration and Customs Enforcement agents, arguing the Obama administration's policy change could result in receiving disciplinary action for doing their jobs.

In a press release posted on Bryant's website, he said the federal government has ignored the growing problem of illegal immigration.

"I believe this action by the Obama administration is unconstitutional and circumvents Congress's authority. The fact remains that illegal immigration is a real issue with real consequences, and ignoring the rule of law is irresponsible. As governor, I cannot turn a blind eye to the problem of illegal immigration and its costs to Mississippi," Bryant said.

Bryant said he joined on the state's behalf "based on the significant fiscal costs that illegal immigration imposes on the state." In 2006, then-State Auditor Bryant commissioned a report that concluded undocumented immigrants cost state taxpayers $25 million based on "significant education, law enforcement and health care costs, as well as substantial lost tax revenues and other  economic losses."

"The OSA Report was based on an estimate that the number of illegal aliens in Mississippi in 2006 was 49,000. This represented a midpoint among various estimates available at the time. Upon information and belief, the State's current illegal alien population remains that high, if not higher," the complaint states.

The Mississippi branch of the American Civil Liberties Union denounced Bryant's joining the immigration lawsuit on the state's behalf.

Nancy Kohsin-Kintigh, the ACLU of Mississippi's program director, said Bryant is "trying to snatch that opportunity away from" young people whom the president's executive order helps achieve the American dream.

"If Gov. Bryant is truly concerned about the economic impact of undocumented immigrants, why would he deny these young people the opportunity to get work permits and become taxpayers?" Kohsin-Kintigh said.

The Bryant administration argues that joining the lawsuit will not cost Mississippi taxpayers as attorneys Michael Jung and Kris Kobach are representing the state at no cost.

Kobach, who is also representing the ICE agents in their suit against the U.S. Department of Homeland Security, ran unsuccessfully for a seat in Congress in 2004. In 2010, Kansas elected Kobach to serve as the state's top elections officer.

In the past two legislative sessions, Mississippi has attempted to pass a immigration enforcement law modeled on SB 1070.

How can ICE agents sue for something that might happen? And why would Mississippi have standing? Any lawyers lurking?