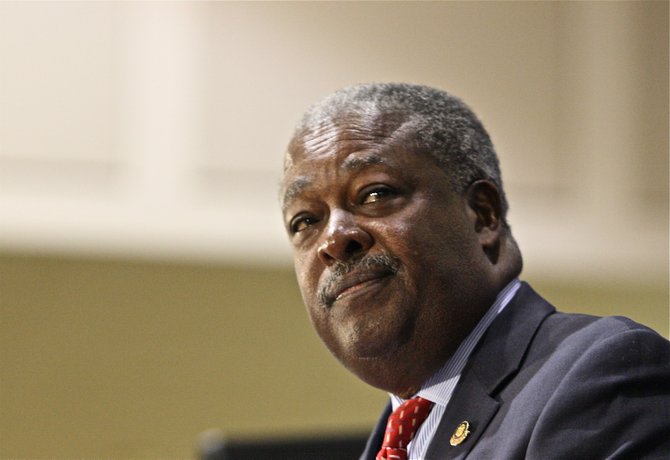 Mayor Harvey Johnson Jr. announced a major increase in water and sewage maintenance as part of his budget proposal for the upcoming fiscal year. Photo by Jacob Fuller.

JACKSON, Miss. (AP) — The city of Jackson has agreed to spend $400 million to make sewer improvements and to pay fines to the Environmental Protection Agency for releasing more than 2.8 billion gallons of minimally treated sewage into the Pearl River system over the last four years.

The city council approved the consent decree with the EPA on Monday. Details will come available after the mayor signs the document and it is filed in court.

Mayor Harvey Johnson Jr. says the city was able to craft a deal with the EPA that allowed the city to pay less with more time to make repairs.

"It's a lot of money and a rate increase concerns me. It concerns people who are in the system, but we're trying to do all we can to make sure that we don't dig any deeper into the pickets of ratepayers," said Johnson.

Jackson will have to pay about $400 million dollars over the next 17 to 20 years in repairs and penalties.

Negotiations had been going on for two years.

"The Pearl River is actually something that's been happening for quite some time; however, just rest assured that if it was indeed as bad as the print made it seem, the EPA would have shut us down a very, very, very long time ago," said council president Tony Yarber.

Officials said the taxpayers have spent $70 million dollars in sewer system improvements and $155 million on the water system since 1997.

The city council voted 3-2 Monday to agree to the plan.

"They didn't explain to me where they're going to get the money from," said Councilman Frank Bluntson, who voted against the proposal. "At least put it out there, have some transparency. Say what's going to happen."

Blunston is an announced candidate for mayor.