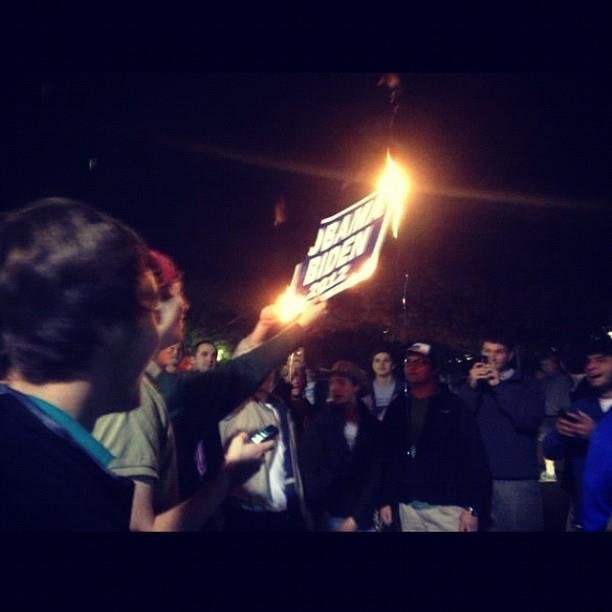 This photo of students at Ole Miss burning an Obama/Biden yard sign in protest of the president's re-election victory went viral Election night.

Gretchen Higgins had just returned to her Oxford dorm room when she heard the commotion outside her window. Midnight was nearing on Nov. 6, after polls had closed on Election Day. After about 10 minutes, as the chorus of what started off sounding like celebratory cheers grew louder, Higgins went downstairs to see what was going on.

There, near the intersection of Rebel Drive and Student Union Drive on the University of Mississippi campus, a small group of black students celebrated President Barack Obama's landslide electoral victory. The revelry had started in front of Kincannon Hall, a seven-story all-male dormitory largely populated by African Americans.

Black students taunted white students about the victory of the nation's first black president over Mitt Romney slogans from Young Jeezy's 2008 post-electoral creed "My president is black." A larger group of white mostly male students had come over from Stockard Hall and tried to shout down the black students with the old Confederate rallying cry of, "The South will rise again."

Higgins, a freshman biology major, witnessed a fight between one black and one white female student after the white student, who appeared to be drunk, said "f*ck Obama" as she passed her black classmate.

Higgins believes the white students, most of whom were male, weren't necessarily adherents to Republican political ideals or even Mitt Romney loyalists.

"I would say more in this case, (they were) anti-Obama. I doubt all those boys knew politics. It was more of a racial thing," she told the Jackson Free Press in a telephone interview Thursday.

A while male student who identified himself to a Mississippi Public Broadcasting reporter as Jansen said: “The N-word was used also. Every word in the book probably was used.” Jansen told MPB that the slurs were directed at the black students, not President Obama.

Higgins got a whiff of marijuana smoke and a lot of people in the crowd seemed intoxicated because that evening, many of the fraternities and sororities had swaps, a kind of social mixer held regularly at Oxford watering holes.

Campus police responded to reports of a disturbance at the student union and arrived to find what an officer said was around 40 students milling about. In the next 20 minutes, the crowd ballooned to approximately 400, "many of whom were chanting political slogans."

Ole Miss officials also said that police made two disorderly conduct arrests, one for failure to obey a police order and one for public intoxication. Jones said the university received no injuries or property damage. A photograph of a group of white students standing around an individual holding a burning Obama/Biden yard sign was widely circulated on the Internet.

After rumors of a riot spread across campus and social media networks, Chancellor Dan Jones responded with a statement the following morning describing the situation as resulting from "students who took a very immature and uncivil approach to expressing their views about the election."

"The University leadership strongly condemns this kind of behavior and is embarrassed that any students associated with the university would use this kind of language," Jones said.

While the Ole Miss made national headlines as media outlets attempted to draw parallels to the 1962 riot on the same campus after James Meredith enrolled, at least one other school had a similar experience.

The Associated Press reported that "about 40 students at Hampden-Sydney College shouted racial slurs, threw bottles and set off fireworks outside the Minority Student Union within minutes" of Obama's re-election.

"I am terribly disappointed with the students who participated in this harmful, senseless episode including those men who stood idly by and watched it happen… There is no place for bigotry or racism on this campus," Howard wrote.

The day after the Ole Miss disturbance, 700 students, almost twice the number that had gathered to watch the events fold on election night staged a candlelight walk.

Higgins, an Illinois native, called the negative publicity unfair. "I mean, our campus is a great campus so I don't think we should have gotten the negative judgment that we might be getting," she said.

This Saturday, Nov. 10, the William Winter Institute for Racial Reconciliation and the Center for the Study of Southern Culture is hosting a "We Are One Mississippi" Grove Tent from 2 to 6 p.m. in front of Barnard Observatory for the Ole Miss versus Vanderbilt football game. Bill Howl-N-Madd Perry will perform. The groups will give out One Mississippi stickers and shirts.

Thanks for giving the candlelight march exactly two lines. You were my last hope that one of our local media outlets would have covered it as it should have been. How about pictures of the Dean walking with Hope Owens-Wilson, an African-American student from here in Jackson, in front of hundreds of other students. How about this one? http://www.facebook.com/#!/photo.php?...">http://www.facebook.com/#!/photo.php?... This was organized by students in less then a couple of hours. No one in this state is giving these kids the credit they deserve. Had to turn to TV station out of Memphis and Gawker to find anything but bare bones coverage on the walk. Ironically enough two of the students most responsible for getting this organized, Kaitlyn Barnes and Hope, have ties to your publication. Seems like you want to tout that.

Beyond the incident itself, I'm astounded that there are dorms on a public-university campus that are mostly black or mostly white. Is this the case at other public universities? Confused and disturbed by that.

I'm not sure if that is correct and I speak from experience because I have one daughter who is a sophomore and another daughter that will be a freshman next fall. The enrollment has grown so rapidly at Ole Miss that the vast majority of on-campus students are freshmen. Freshmen are required to live on campus so that leaves very few rooms for upperclassmen. If you follow the University's instructions to the T, you can choose which dorm and even which floor you live on. Good or bad you find most floors are clusters of kids from the same hometown I.e. my daughter lived on a predominantly Jackson floor. I know my daughter had several AA residents on her hall and her RA was AA (and she was crazy about her). I would suspect that if Kincannon is mostly AA, that it is by choice or it could be students who did not register for housing the first week that they could. Kincannon is one of the older dorms (it was new when I lived there but that was 100 years ago). The newer dorms fill up fast. That said, the incident was regrettable and it shows how the actions of a few can undo the good works of many people over the past 50 years. I thought the candlelight vigil 2 nights later was a good move. I just wish that it had garnered as much publicity as the first incident. Very

Y'all might not have seen http://www.jacksonfreepress.com/news/...">the story R.L. did before the march. A professor at Ole Miss sent us this student who actually saw much of what happened afterward; it was a follow-up story.

As for photos of the healing march, I've asked several folks in Oxford to send me something and haven't received any yet. We'll do a whole gallery if someone will get us photos. My address is: [email protected].

As for the dorms, it sounds like that choice policy (especially which floor) allows this kind of segregation to happen. That's unfortunate. When I was at State, we weren't able to make those choices. I don't know about now. It seems like a huge part of a university education (especially for kids who go to white academies or resegregated majority-black schools) would be to very mixed in dorms. It's not like you couldn't choose your roommate. Students need to learn to get along and continuing segregation into college doesn't do that.

Also, kdavis, we have several Ole Miss alums who work here who described the dorm situation to us as unfortunate.

I don't have any exact numbers at my disposal but I can assure you that the dorms are not segregated. You do have to follow the school's instructions and you have to apply for housing the first day that they accept registration. The big problem is that there were no new dorms built from the 1970's until just a few years ago when they built 2 new ones and they opened another new one this year. My sophomore had to move off campus because freshmen get 1st preference which leaves very few rooms for everyone else. The pace of new construction has not kept pace with the growth in enrollment. I'll send you some pictures in a few minutes.

kdavis, I didn't say that Ole Miss officially segregates the dorms (which would be http://www.thefreedictionary.com/de+j...">de jure segregation, Jim Crow-typ-e. The question is: Are they allocated in such a way that allows a http://www.thefreedictionary.com/de+f...">de facto segregation (which was the kind of segregation most of the U.S. used to have as opposed to the Jim Crow South). Neither is good, and public universities should do everything possible to avoid a situation that allows a dorm to become majority African American. That kind of division is not going to educate these kids about "the other"--as we apparently saw this week.

So, all of these students at TSUN are away from home for the first time and are allowed to live where and with whom they wish. Shocking! We cannot allow that in the new South!

So what if a dormitory is majority-black or majority-white or even all white or black. If that is how the students wish to align themselves, then that should be their prerogative. Whether or not it is de facto or de jure integration, is that not just as wrong?