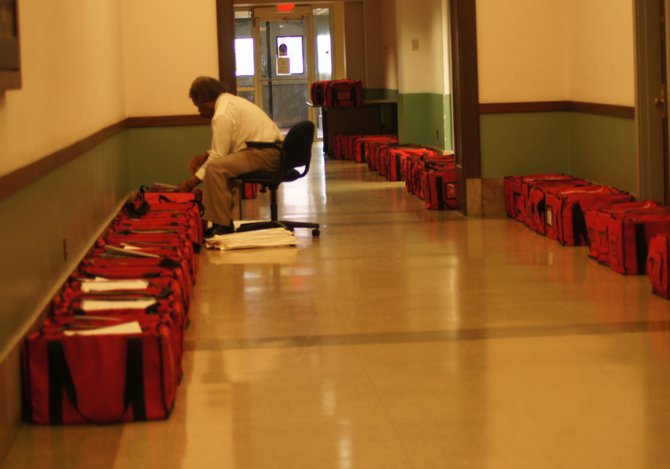 The Mississippi NAACP and Hinds County Circuit Clerk's office are pointing fingers at each other over an unknown number of missing voter-registration forms.

At a press conference this morning to announce the NAACP's voter help line (1-888-601- VOTE), Mississippi State Conference NAACP President Derrick Johnson said that as of Friday, the circuit clerk's office had not entered many voters into its voter-registration database. He urged voters whose names do not appear on voter rolls when they show up at the polls tomorrow to request an affidavit ballot to ensure that their vote is counted.

The NAACP recently held a massive voter-registration drive in which they registered some 10,000 people to vote in Hinds County, including this Jackson Free Press reporter. After the press conference, the reporter visited the Hinds County Circuit Clerk's office to inquire about the status of his voter registration. A representative of the office informed the reporter that she did not have his information in the voter database.

"We worked until 5 o'clock Saturday (Oct. 6)," to enter the last of the outstanding registration forms, said Hinds County Circuit Clerk Barbara Dunn. She said that voters whose registrations were not received have no recourse through the circuit clerk's office.

The NAACP's Johnson insisted the organization had submitted the forms before Mississippi's Oct. 6 cutoff for registering to vote in tomorrow's general election. Johnson said the NAACP has received several calls from voters who said their information was not entered in the clerk's voting system and added that he plans to present copies of the forms this afternoon to Dunn, whose office has been repeatedly cited for poor management.

This afternoon, in the Capitol rotunda, a group called Voting Rights for All MS held a press conference to demand Gov. Phil Bryant retract recent comments about voter ID that the group believes could mislead voters.

"If you have to show a ID to buy a pack of cigarettes or to buy alcohol, which you should, then certainly you ought to have to present an ID to vote, so that we are certain that you're not stealing someone else's liberty and their chance to vote," Bryant told the Associated Press Oct. 31.

A petition at Signon.org has received more than 1,000 signatures demanding that Gov. Bryant retract statements he made about voters presenting ID at the polls.

"If you voluntarily show ID that opens the door to voluntarily doing so many other things that are against the law," Jones told the Jackson Free Press this morning.

Because of Mississippi's history of voter suppression, the U.S. Department of Justice must clear any proposed changes to the voting process in the state. Although the state Legislature passed a voter ID law during the last session, the DOJ has not given its approval for the state to implement the law. In Mississippi, therefore, no voter ID is required to cast a ballot in the Nov. 6 election.

An NAACP representative this afternoon told the JFP reporter that his registration information would be delivered to the circuit clerk's office and that said the individuals' vote would be counted as long as he submits an affidavit ballot on Election Day.

Not sure if this makes me feel better or worse that my 18 year old's registration (through NAACP) was mishandled. He was excited that his first opportunity to vote was a presidential election year. Will do affadavit ballot but extremely put out that it's come to this.