Lumumba to Run for Mayor 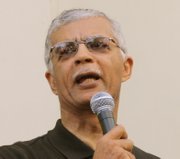 Ward 2 Councilman Chokwe Lumumba announced Thursday he will run for mayor of Jackson in 2013.

Ward 2 City Councilman, attorney and community activist Chokwe Lumumba announced today that he will run for mayor of Jackson in 2013. Lumumba has continually stressed the disproportionate number of black business owners in an 80-percent African American city.

In the written announcement of his mayoral candidacy, Lumumba said the city should focus on the economic development of all of greater Jackson, and not just downtown. He will officially make the announcement to the public Monday, May 7 at 1 p.m. at City Hall.

Mississippi Human Rights Lawyer, Activist and City Councilman Chokwe Lumumba Announces His Candidacy for the Mayor of Jackson in 2013

Monday May 7, 2012, one year away from the democratic primary for the Jackson Mississippi mayoral race, City Councilman Chokwe Lumumba will announce his intent to seek the mayor's office. Councilman Lumumba, a veteran Human Rights and Criminal Defense Attorney and dedicated community activist, will seek office to bring new economic ideas that benefit the residents of Jackson, transparency to government affairs and fixing long standing city service issues (roads and water). Councilman Lumumba states "There is an opportunity now to bring a new vision to Jackson that will bring economic development and needed jobs to greater Jackson and not just downtown. Public funds must be used for the benefit of the majority of the residents of Jackson not for the private benefit of a few. That's why I'm running for Mayor."

Mr. Lumumba intends to stick to his roots and run a grassroots campaign reaching out to professionals, working class and poor communities, making the needs of the people the focal point of his campaign. Chokwe states "We intend to make the People's voice the centerpiece of this campaign. By that we mean we will exchange ideas with the people and allow them to have a voice in the working of this city. The people of Jackson will participate in molding this campaign and my administration that creates a participatory democracy. As we say the people must decide the future of Jackson; we can continue to limp along or take bold initiatives to bring economic justice and jobs to the people of this city."

Interesting to see what ideas he has.

Learned today, via Othor Cain, that Frank Bluntson is running too. Johnson vs. Lumumba is a very hard choice (safety vs. excitement) and I'll probably still be making up my mind when I pick up the popsicle stick, but at least Bluntson gives me someone to vote against. I'm betting he'll also peel off the shadow-PAC crowd, which is good; imagining five rows of right-wing Brylcreemers at a Chokwe Lumumba rally is surreal, and that's not really the kind of support Harvey Johnson needs right now, either.

Yes, we reported a while back that Bluntson is in. Should make for interesting times.