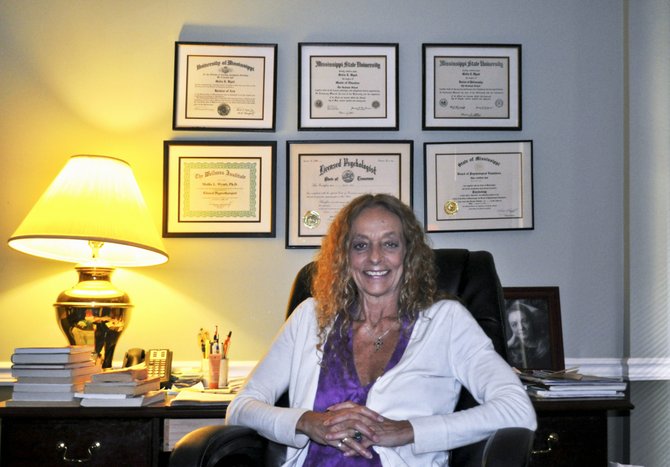 Helping abusers and victims of domestic violence get to the root of their problems is "a passion in my heart sent from God," Mollie Wyatt says. A licensed psychologist, Wyatt counsels groups, families, couples and individuals in her private practice at Recovery Consultations in Highland Village. She is also a facilitator for the Batterers' Intervention Program offered through the Center for Violence Prevention in Pearl and leads group-counseling sessions for domestic-violence victims.

A Jackson native, Wyatt, 61, earned her doctorate in psychology from Mississippi State University. She lived in Nashville, Tenn., for about 20 years, but returned 10 years ago to be closer to her parents. She has a daughter, Jennifer, 33 and a granddaughter, Laya, 15.

Wyatt is dedicated to helping those affected by domestic violence, whether they are victims or abusers. Her work focuses on helping them realize the issues behind their behavior.

Judges who hear domestic violence cases can order offenders to participate in the 24-week BIP program instead of sending them to jail. In her role as a program facilitator, Wyatt has led all-male and coed classes.

The violent abusers are not just males, Wyatt stresses. "More females are coming out about being abusers," she says. She adds that anger builds for abusers--whether male or female--often based on histories of abusive childhoods. Domestic violence is a cyclical, generational problem. The BIP, however, is not an anger-management class, but a program that gets to the abuser's core beliefs about themselves and their relationships, and helps abusers learn how to express themselves without hostility and violence.

We teach people to be strong and not express their feelings--men, especially, because it is a sign of weakness, she says.

The BIP classes are filled with abusers who initially thought they did not belong there or who attended only because a judge ordered them to go. Wyatt says most people leave with a different attitude. Although she knows she cannot reach all of them, she knows she has made an impact on many. "Anger is a powerful feeling that can move you away from your true feelings," Wyatt says.

"We always need to be improving as facilitators," Wyatt says.

Bringing awareness to domestic violence is one way of curbing the tide. In the meantime, Wyatt helps everyone involved. She hopes that shelters like the Center for Violence Prevention and the programs it offers can expand to other cities so she will be able to "reach more souls."

"I hope to expand my vision and to continue to witness true transformational change in individuals," she says.