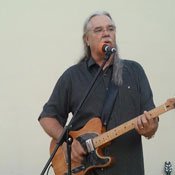 Mississippi Blues Marathon runners crossed the finish line to blues pumping from The Juvenators in front of the Old Capitol Museum. The local blues band, fronted by Virgil Brawley, congratulated early finishers with continuous music at the intersection of State and Capitol streets.

Virgil "Big Juv" Brawley, 63, the band's lead singer and guitarist, is a Renaissance man with a storied past as a decorated Army sniper, a carpenter, a butcher and a horse whisperer. Brawley has been playing the blues ever since he was able to pick at the guitar strings. His life can be heard in his albums: "Golden Hearts," "Live From Mercury Room," "Mojo Burning" and "Bottle Tree." In his earthy, jazzy blues, you can almost hear his days of carpentry, butchering deer and training horses.

As a teenager in Brookhaven, Brawley performed in his hometown with a local rock band until the end of the 1960s when he enlisted in the Army. After spending a year at Fort Benning in Georgia, Brawley was crawling on his belly in grass tall enough to hide grown men. He spent all of 1971 in Vietnam as a sniper. He returned to the states as a wizened 22-year-old with a Bronze Star.

He enrolled in the University of Southern Mississippi where he studied television, movies and creative writing. After graduating in 1979 with a bachelor's degree in communication, he moved to Texas and married. In 1985 he welcomed a son, Travis, who is now an aspiring musician following in his father's footsteps and who works for a record company in New York City.

Brawley gave up music for 11 years after Travis was born; he wanted to be a hands-on father. During his break from music, Brawley was a carpenter and a butcher in Texas who also worked as a horse trainer from 1981 to 1996.

"I got paid to build old buildings—vintage buildings," he said. Brawley worked in Texas on western saloons and posh Victorian houses.

His butcher apprenticeship in a deer camp in Texas happened when he offered to trim a close friend's $120 worth of meat and save her from spending an extra $60 at the Kroger butcher counter. She called to tell him about a Christmas party and mentioned the meat.

In 1996, he moved back to Mississippi as a single man, and he married Anne Sullivan. Brawley started playing at local venues like Hal & Mal's and met up with kindred spirits.

Bob "Byrd" Lovell, George Vance and Guy Wade began The Juvenators in 1998. (T.J. Hall replaced Wade in 2010.) The band adopted the motto "the blues, the whole blues and nothing but the blues." Brawley is the lead singer, plays guitar, slide guitar and resonator; Lovell also sings, plays guitar and slide guitar; Vance plays bass and sings; and Hall plays drums.

Fifteen years later, Brawley and his wife live in Belhaven just behind New Stage Theatre. Brawley made an identity for himself in the local music scene.

In the 2003 documentary, "Last of the Mississippi Jukes," Brawley appears vamping guitars onstage with the music director of the film, David Hughes, at the beloved Subway Lounge in Jackson. They call for Jimmy King, proprietor of the Subway Lounge (now closed), who hops up on the stage, and the band jams –––an old song, "Next Time You See Me," by Little Junior Parker.

Brawley can thump out hot and cool songs. Listen for his booming southern voice and when you do, sit back and enjoy because the chances are he brought along his guitar and some blues friends to play along.

For information and to sample The Juvenators music, visit their Myspace and Facebook pages.