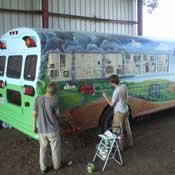 Courtesy Daniel Doyle and the G-6

The Farm on Wheels is traveling cross-country as an example of sustainable, eco-friendly lifestyles.

It started out as a typical yellow school bus. When six Mississippi teens were done with it, the bus had turned into a colorful "Farm on Wheels," with a cheery agricultural scene along the side topped with puffy clouds and even a rainbow or two. Oh, and it now runs on vegetable oil instead of gasoline, and a chicken coop is among its new features.

The 2011 Mississippi School of Math and Science graduates, all 18 and known collectively as G-6, or Green-Six are: Bobby Glenn of Moss Point, Daniel Eisler of Ocean Springs, Tyler Crutcher of Senatobia, Ryan Chapman of Brandon, Sterling Harper of Gautier and David Liang of Cleveland. They set out to share the perks of eco-friendly living.

"We wanted the road trip to be epic," Glenn said with a slow grin.

The original plan was to convert an old school bus to run on vegetable oil and drive it around the country as their senior trip. In the spring, Harper read an article in Momentum (PDF), Mississippi State University's engineering magazine, about MSU students with a bio-diesel bus that ran on vegetable oil and was inspired.

"The idea stuck with us," Harper said. "We did not want to go broke over gas."

The friends purchased a 1990 school bus and drove more than 700 miles to retrieve it from Alabama. Other MSMS students helped them clean the bus and fix it up. During spring break they brought the bus to Glenn's house in Moss Point, where they made more renovations. They gutted the interior to install bunk beds and stapled-down carpet. Then, the bus was put on the back burner until the summer when they began working with Daniel Doyle to convert the bus into a greenhouse.

Doyle was one of Glenn's former teachers at MSMS. He heads Gaining Ground's North Central Mississippi chapter and runs a farm and grocery delivery system in Oxford. A few days before graduation, he pointed the young men toward the Gaining Ground Sustainability Institute of Mississippi, a non-profit group in Starkville, which promotes eco-friendly living. Gaining Ground was already planning a farm on wheels for an educational tool. The group agreed to help sponsor the boys' road trip if they would use the bus to educate people about a sustainable, eco-friendly lifestyle.

They then converted their bus engine to bio-diesel. It takes an ounce of gasoline to start it up, and then the boys switch the engine over to run solely on vegetable oil. The 1990 model school bus holds two large tanks of vegetable oil.

By June 26, the Green 6 crew finished a base layer of paint and was already showing off the bus in Oxford. Two Oxford artists, Wendy Hansen and Andi Bedsworth, painted a radiant mural.

The G-6 adapted the bus to house themselves, a garden of figs, strawberries, blueberries, and a coop full of chickens hatched on the bus. At each stop, the hens will be able to go through the back door and forage inside a portable fence.

The group took the bus on a test run through Mississippi. Their first stop was at Fondren after 5 on July 7. The next week, they stopped at the Starkville Community Market and the Pascagoula River Audubon Center in Moss Point. The state test tour included Hattiesburg and Oxford. On the national tour, they visited the Grand Canyon and will travel through California. They plan to visit Washington, Colorado, Montana, Illinois and Tennessee.

Now, there are three bunk beds in a "U" shape at the rear of the bus. They also have electricity set up to charge laptops and cell phones as well as a monitor for movies and video games. They built an irrigation system that channels rain water to the small garden. A worm compost bin provides natural fertilizer for the plants. A solar panel is installed on the bus to provide electricity, as is a retractable awning for shade and shelter from the rain.

The purpose of the garden is to educate visitors—especially children—that homegrown food tends to be cleaner and healthier than food from a grocery store. The children will get to taste first-hand an organic fruit. The presence of plump, happy hens will be a far cry from the disease-ridden, sleep-deprived chickens in overcrowded coops on commercial farms.

"You know how the kids get gathered up to go to museums and such? Well, I thought, ‘Why not make a mobile farm instead?' I wanted to bring the farm to the kids instead of taking kids to the farm," Doyle said.

Next, the bus returns to Oxford in August where it will become a greenhouse, complete with trees and bushes. The bunk beds will be removed to make more room for plants and free-range chickens. Glenn plans to intern with Gaining Ground by driving the bus around on another nationwide tour after the final conversion.

To support and donate to the Farm on Wheels and to see a schedule of stops, visit http://www.msmobilefarm.com. Brianna Robinson contributed to this story.