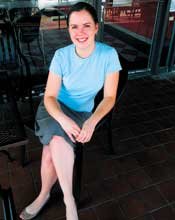 Ruthie Taylor teaches middle-school classes in theater production where she helps students from fifth to eighth grade find themselves through the characters in plays and through the different functions needed to bring a production to the stage. "Middle school is a tough time to grow up," she says. "I want to give the students an outlet for their energy."

As many Mississippian do, Taylor returned to her hometown of Jackson last year from studying 1,256 miles away at Wellesley College in Massachusetts. Since April, Taylor has been working as a theater teacher for the middle school at her alma mater, St. Andrew's Episcopal School in Ridgeland. She attended St. Andrew's from third grade until her graduation in 2005. Taylor came full circle, back to the source of her lifelong passion.

"I want to give back to the program that inspired me," Taylor says.

With actors, artists and musicians in her family, artistic talent runs in her blood. She discovered a channel for her talent in St. Andrew's theater department when she was in middle school and graduated from Wellesley College with a degree in theater studies (with honors) in 2009.

She prefers to stage manage the school's musicals and plays from backstage. Taylor knows that theater is more than just the actors up front. She wants to be where the real magic happens, she says, angling the spotlights, styling the costumes, and designing and placing the background and props to combine it all into a fantastical show experience. If students are not gifted thespians, they can explore the technical side of stagecraft and learn the different roles behind the scenes.

Taylor, 24, also coaches the middle-school speech and debate team and is one of three coaches for the high school team. With her direction, the students find confidence and eloquence through public speaking, debating and story-telling in middle school. The team has made trips as far away as Boston, Mass., for national debate competitions.

In addition to teaching, Taylor plays bass in the rock group Swamp Babies. Josh Taylor, her high school sweetheart and husband, is the band's lead singer and guitarist. Ryan Baucum, a longtime friend of the couple, plays the drums in the group. The Swamp Babies have been playing locally for about a year, performing original songs as well as some rock 'n' roll covers.

They performed in her neighborhood at Bright Lights, Belhaven Nights last Saturday. "It was a fun, well-attended event," she says. "We actually finished the evening by playing at Ole Tavern." Taylor was pleased to see that her friends and their children had fun listening to their music.