For the Love of Art | Jackson Free Press | Jackson, MS

For the Love of Art 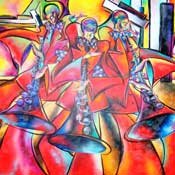 Samuel McCain of Ridgeland produces art like this out of his home amid his busy family life.

Toddlers dance around the dining room table as Samuel McCain absorbs the musical notes from his iPod. The tunes might inspire his next piece of artwork. Sitting against the patio window, his easel holds the blank canvas where a palette knife might chisel bright paint like a sculptor with a block of granite.

While many artists seek solitude for developing a masterpiece, McCain thrives as a visual artist amid the squeals of Raighan McCain, 2, and Khaleah McCain, 3. His wife, Tasha McCain, and two teenage boys, Paris Stigler and Samuel McCain Jr., complete the family that lives in his Ridgeland home.

McCain, 37, a "strictly oil" artist, says he dabbled as a youngster drawing tennis shoes, rockets and stick figures while growing up in a military family that moved frequently between Illinois and Virginia. His family eventually settled in 1986 in Mississippi where he entered high school, but his self-awareness as an artist opened up even more when he studied art in college. McCain fell in love with oils as a freshman at Mississippi Delta Community College in Moorhead, where he won the school's Freshman Drawing and Painting Achievement Award in 1997.

"I will never forget the first time in 1997 when I used oils in class and finished a piece," McCain says. Since that time, he has filled his artwork with bright colors and swirling lines creating the human form or inspirational figures such as musical instruments or maybe, Mississippi flora. For more than a year, McCain has displayed his work at the Municipal Art Gallery (839 N. State St., 601-960-1582), and is also displaying at Sanaa Gallery (5846 Ridgewood Road, 769-218-8289) and Gallery 1 (1100 J.R. Lynch St., 601-960-9250) at Jackson State University.

"I feel my work is a musical piece created by hand with broken lines and a broken prism," McCain says. "Music and paint will never see divorce." As an aspiring bass guitar player, McCain said that music, including the blues, loosens him up to start painting, yet his children can inspire an image, as can a childhood memory, a place in his hometown or a place he would like to visit.

Even so, McCain says his art does not portray the usual way an African American community is represented in Mississippi. "In one of my pieces, I don't show the traditional cotton fields, but show musicians in fine clothes, wing-tipped shoes ... and put a different face on it," McCain says.

Twelve years after graduating from school, McCain raises his kids, pays his bills and does what he loves: his artwork. But he also produces art without a typical studio atmosphere and embraces the non-traditional way of painting.

"I like to stay away from the norm, do the opposite of what I am taught and develop a different type of form," McCain says. He doesn't go by the color wheel and ventures into different levels of an art piece, he said. For example, McCain's work may use an unusual color for a skin tone or a landscape and may become abstract in some ways. His work overtly uses lines to present movement, like in music.

Despite his busy household and active children, McCain says he enjoys taking time to share his oil-painting process with his children as he creates a new art. He already sees a spark for art from his 3-year-old. But one process his daughter and family will never see him use for his art is computer and digital technology.

"Artists should start fresh on their own; don't go to technology," McCain says. The piece should be of the heart, and that cannot be done on a computer." For the love of art, McCain likes to stand back, look at his work, get out of the chair and come back to it, then start again.

"Don't throw the palette away; pick it up and paint and do it," McCain says. "Young artists can sell their work and find audiences with 'untraditional pieces.'" He admits to "painter's block" from time to time, but he hasn't used computer technology to produce his work or to influence him.

McCain also understands the business of selling artwork. "There are three ways individuals buy art: buying artwork to match their furniture; to purchase a piece as a fan; or to fall in love with something different that they see in my artwork," he said. No matter, McCain says the love of his family and art sustains him.

"I want to see it in their eyes ... and recognize that what I put on the canvas is a gift from God," he says.