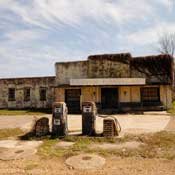 Suzi Altman's photo, "Wildwood Plantation, Outside Greenwood, 2008," is on display at the Mississippi Museum of Art.

Photographer Suzi Altman didn't glance back when she left New York City after years working for prestigious news outlets such as the Associated Press and Rolling Stone magazine. When she moved to Mississippi 12 years ago, the Delta made her heart sing, she said. She embraced a more casual lifestyle compared to the convention of East Coast living. The resettlement, Altman said, led her to produce more substantial work than she had ever created in New York City.

This winter, her work is hanging at the Mississippi Museum of Art. Los Angeles-based curator Franklin Sirmans recently included Altman in the 2011 Mississippi Invitational.

"(Sirmans) has respect in the field for recognizing artists," Altman said. Sirmans looked at the work blindly with no connection to the artist name.

The Mississippi Invitational, initiated in 1997, asks a guest curator each year to survey recent developments by contemporary visual artists living and working across Mississippi. Out of 161 submissions in 2011, Sirmans narrowed a list to the final 13 in the exhibit.

Although Altman, 42, continues to accept assignments outside the state, the artist's immersed passion for the Mississippi Delta mixed well with her expertise as a photographic social documentarian. Her portfolio includes work chronicling the destruction of the Gulf Coast after Hurricane Katrina and the BP oil spill. Her photos also take a hard look at white supremacy's deadly mark.

Altman flew in with the Mississippi Emergency Management Agency to the Gulf Coast immediately after Hurricane Katrina in 2005. "I went into a Huey (military helicopter) with Gov. Haley Barbour," she said. She startled the governor by leaning out the open helicopter door to photograph the devastation. "There were no landmarks, no containment like 9-11," Altman said. She also recalled a search and rescue trip in Waveland, where she photographed and walked in muck over her knees with snakes and alligators sighted in the area.

"There were bodies in the water," Altman said.

But Altman said one experience that unnerved her was the inequality and racism she saw in Mississippi. Raised in Youngstown, Ohio, Altman said she grew up in a place where there was little inequality.

"One of the scariest places I have been to is Burrage Road in Philadelphia, Miss.," she said. Altman said she was the first photojournalist in 41 years to venture onto the Burrage Road property where three murdered civil-rights workers were buried in 1964. "Ya know, it was about the Klan," she said, "It was a story that needed to be told."

Freedom Summer was a 1964 U.S. campaign to register as many African American voters as possible in Mississippi, which historically excluded blacks from voting. More than 1,000 volunteers, mostly college students and young adults, from all over the country descended on Mississippi to work. On the first day of Freedom Summer, a Neshoba County deputy arrested Andrew Goodman, James Chaney and Michael Schwerner. The sheriff later released the three, only to have members of White Knights of the Ku Klux Kan shoot them to death. As a photojournalist, Altman covered the 2005 trial of Edgar Ray Killen, a Klansman indicted for manslaughter in the case and found guilty.

Her photographic catalog also touched the region's heart with storytelling on the preservation of Vicksburg's Miss Margaret's Grocery and a visual narration of an African American baptism. Altman photographed Rev. Dennis' Castle in Vicksburg, a folk icon in need of repair. Its colorful grocery exterior and interior is decorated with beads and Christmas lights.

Altman recognized the need for showing respect and honoring the culture of the Delta as she photographed. "You have to get to know the people before shooting them," she said.

With her goal to photograph a 100-year-old tradition, an African American baptism, Altman said she attended four Sunday church services before she brought in her camera.

"I had to ask whose land I was on and make connections with the preacher and parishioners," she said.

She studied art and photography at the University of Arizona, but she says her real education was the on-the-job training she got as a Rolling Stone magazine intern. That led to assignments with AP. But no matter where her work takes her, she said she is connected with the Mississippi Delta.

"The Delta is beautiful, and I call it home," Altman said. "I have it all—a great job, a great cost of living—and I love the New Orleans Saints."