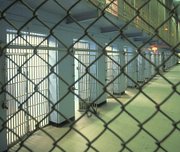 In DeSoto County Schools and Jackson Public Schools, more than 90 percent of school arrests are for misdemeanors, not felonies, which some say feeds the school-to-prison pipeline.

The Henley-Young Juvenile Justice Center is finally making needed repairs to the facility and establishing written policies and procedures, but the jail still has a lot of work left to turn around what a youth-justice advocate earlier this year called a "culture of suppression and harm."

The Southern Poverty Law Center and Disability Rights Mississippi filed a class-action lawsuit in 2011 alleging that children at the Jackson facility were denied mental-health care and other rehabilitation services.

As part of a settlement reached in March 2012, Michigan-based juvenile-justice expert Leonard B. Dixon was appointed to monitor Henley Young's progress. During Dixon's September visit, he observed that although the jail facility has made needed cosmetic improvements and started drafting policies and procedures, understaffing remained  a problem.

"In part, because staff members are burnt out, the residents are not safe. In this environment, there are always (shortcuts) taken, which could at some point jeopardize the county because it is constantly placing the county at risk of liability and reduces any well developed detention/rehabilitative model," Dixon wrote in his report, filed in federal court last week.

Dixon also found problems with the school inside the correctional facility. He wrote: "From my previous visits and my more focused observation during this visit, the school is dysfunctional."

Dysfunctionality between the state's schools, law enforcement agencies, courts and youth jails have thrust Mississippi's educational and youth-justice systems into national focus over the years, but advocates hope policy changes are on  the horizon.

In October, the Justice Department filed a lawsuit today against the city of Meridian, Miss.; Lauderdale County, Miss.; judges of the Lauderdale County Youth Court; and the state of Mississippi alleging that the defendants systematically violate the due process rights of juveniles by running a "school-to-prison pipeline."

Not long ago, the term "school-to-prison pipeline" was just a phrase that youth-justice advocates used when discussing rising youth incarceration in the United States. The term has gone mainstream, though, with concern over school-to-prison pipelines in Mississippi and elsewhere growing. On Dec. 12, the U.S. Senate Judiciary's Subcommittee on the Constitution, Civil Rights and Human Rights held its first-ever hearing on ending the school-to-prison pipeline. Sen. Richard Durbin, D-Ill., said that these pipelines "deprive children their fundamental right to an education," during the hearing, which attracted so many spectators it had to be moved to a bigger room.

"Sadly, there are schools that look more like prisons than places for young people to learn and grow," Durbin said in his opening remarks. "This school-to-prison pipeline has moved scores of young people from classrooms."

Zero-tolerance discipline policies, many of which started as a response to playground bullying and other forms of in-school violence, contribute to feeding the school-to-prison pipeline, said Nsombi Lambright of the Mississippi State Conference of the NAACP.

"It's very easy for students to be arrested for normal teenage behavior," Lambright told the Jackson Free Press. "These (arrests) turn into criminal offenses that tie up our court system and taxpayer dollars prosecuting these school-based infractions."

In two Mississippi school districts--DeSoto County Schools and Jackson Public Schools--more than 90 percent of school arrests are for misdemeanors, not felonies, Lambright said.

These policies are also costly to taxpayers. States spent nearly $6 billion to lock up 64,558 youth in residential facilities in 2007. In Mississippi during that period, 219 youth were incarcerated at a cost of $426.51 per day each, or $34 million total.

Despite all the cash being poured into incarcerating children, the Mississippi can't seem to stay out of the news--or the courts--for the way its jails and prisons treat children. In October, the U.S. Department of Justice filed a lawsuit against the city of Meridian, Lauderdale County and its youth court, and the state of Mississippi for systematically violating the due-process rights of children, primarily African Americans and students with disabilities. In its report, DOJ officials took the unprecedented step of accusing Meridian and Lauderdale County of running a school-to-prison pipeline.

Jerri Katzerman, the SPLC's deputy legal director, noted the link between poverty and problems with incarcerated youth in her remarks to the Senate committee.

"Poverty in our communities seeps into our schools and classrooms," Katzerman told the subcommittee. "This leads to fewer resources and qualified teachers and professionals. Mississippi is the only state in the country with no state-funded pre-kindergarten program."

Lambright said she and other social-justice advocates would lobby lawmakers to introduce bills aimed at preventing mass incarceration as well as to help people coming out of prison. In January, the Mississippi NAACP, American Civil Liberties Union and the Advancement Project, a multicultural civil-rights group headquartered in Washington, D.C., will issue a report that focuses on training for school-resource officers and other law enforcement agencies that work in schools.

"Unless a crime happens, police officers don't need to be in schools," Lambright said.

MS and the School to Prison Pipeline:

The MS Youth Hip Hop Summit and the ACLU of MS have a large and robust youth justice program focused on ending the STPP -- join us!

Join us in pushing back on the STPP on Jan. 15th - From the Classroom to the Capitol: Youth Day @ the Capitol RSVP here: www.tinyurl.com/Classroom2Capitol