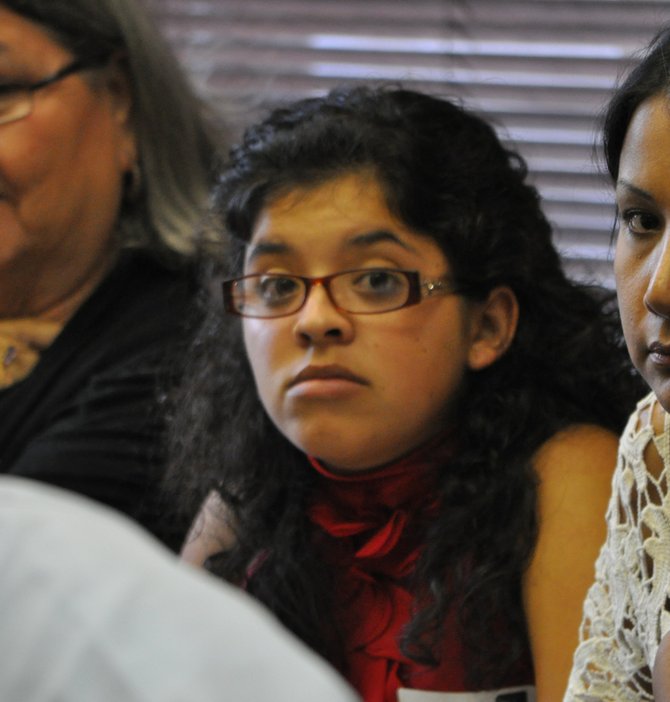 Maria Mazy, 19, is a naturalized US citizen who fears a state crackdown on immigration would destroy the peace and tranquility that she loves about America. Photo by Trip Burns.

Maria Mazy, 19, could be the poster child for either side of the national discussion on immigration. Mazy grew up in Clinton, graduated from Clinton High School, enrolled in Hinds County Community College and, in 2011, became a naturalized U.S. citizen.

She likes America, she said at a hearing on immigration at the Mississippi Capitol last week, and she likes Mississippi.

"It's very friendly. You are not too grumpy," she said, eliciting chuckles from the room.

As much as Mazy is a paragon of the immigrant-made-good ideal, she also represents the basic paradox of states trying to police federal immigration law.

Even though she's a citizen, she looks foreign and speaks with an accent, and so do her father and brothers, all of whom are also American citizens.

"I do not want my father and brothers to have to show our documents every time we leave the house," she said. "What if I forget them?"

But for immigration reform-minded Mississippi officials, their best hope of passing new restrictions on a loophole might come from focusing on tightening regulations on businesses, particularly employers.

That was the tone of the Mississippi House Judiciary B Committee meeting on immigration at the state Capitol.

Promoted as a fact-finding mission, the committee that Rep. Andy Gipson, R-Braxton chairs said its purpose was to help legislators determine whether Mississippi should introduce a new state law or modify existing regulations to address what Gipson characterized as the state's growing immigration problem.

R. Pepper Crutcher, a Jackson immigration attorney, gave a brief analysis of the U.S. Supreme Court's June ruling on SB 1070, Arizona's controversial immigration law. In a 5-3 decision, justices ruled that the federal government has the final say-so on immigration matters and that the provision that criminalized immigrants' failure to carry authorizing documents with them at all times  was unconstitutional.

The court held off ruling on what is widely believed to be the main thrust of the law--requiring cops to stop and detain anyone they have a "reasonable suspicion" is in the country without  legal authorization.

Crutcher said the law presented states with few options to do anything about immigration, except through state business licensing.

Vincent explained that troopers are constantly on the lookout for telltale signs of foreign drug mules, which include old vehicles with new registrations that are also filled with personal belongings.

But even though the highway patrol can access a federal drug enforcement database, Vincent said troopers have a hard time catching repeat offenders because undocumented immigrants often use fake IDs.

"As long as the border is porous, there's nothing we can do to keep them from coming back," Vincent said.

"If they give these people driver's licenses, they're going to be in the polling place voting," he stated.

"Illegal immigration has real consequences for Mississippi, as it puts additional burdens on our already stretched budget," Bryant said in statement.

Bryant's position is a point of much disagreement in scholarly circles. In January, the University of Alabama in Tuscaloosa's Center for Business and Economic Research published a cost-benefit analysis of that state's anti-immigration law. On Aug. 21, a federal judge struck down portions of the Alabama law, HB 87, finding the law could lead to unlawful racial profiling.

Dr. Samuel Addy, who authored the study, looked at the economic effects of Alabama's immigration and determined that because economies are demand- driven, any policy that reduces demand will shrink the economy, no matter how well-intentioned.

If 80,000 undocumented immigrants left Alabama, Addy estimated a loss of 59,536 jobs for a total reduction of nearly 140,000 positions. Assuming those 80,000 people earned $25,000 per year, that's a $7.7 billion hit to Alabama's gross domestic product, plus another $189 million lost in state sales- and income-taxes, and $66.5 million in city and county taxes, according to Addy's analysis.

Israel Martinez, a Jackson-area businessman and an immigrant from Mexico, suggested that a Mississippi university perform a similar independent analysis of the impacts of a state immigration law. He also invited Gipson and Rep. Becky Currie, R-Brookhaven, who sponsored last year's failed immigration bill, to visit the homes of undocumented immigrants and listen to their personal stories. Gipson said he was open to both ideas.

However, whatever the state does might be moot. Amelia McGowan, a staff attorney with the American Civil Liberties Union of Mississippi, said that while the U.S. Supreme Court decision validated laws such as the one Mississippi passed in 2010 requiring employers to verify workers' immigration status, justices made it clear that states could not criminalize the act of immigrants seeking employment except in cases of fraud.

That doesn't give Mississippi much to work with in terms of new immigration-centered laws.

"It'll be interesting to see what they come with," McGowan said.