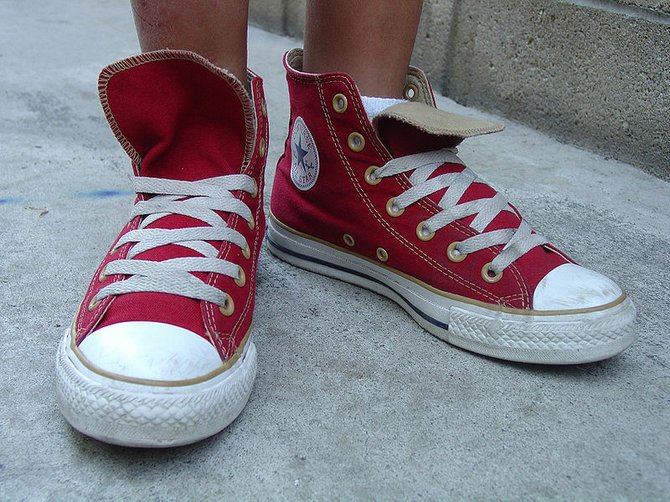 Yesterday, on the first day of school at Canton High School, administrators yanked more than 100 kids out of class for wearing shoes that they say violated the school's dress code. Photo by Courtesy Alfonso Romero

JACKSON — For the second time this week, local officials made headlines for their reactions to children's clothing styles.

Yesterday, on the first day of school at Canton High School, administrators yanked more than 100 kids out of class for wearing shoes that they say violated the school's dress code. The kids--whose parents were called to bring them more appropriate footwear--also received in-school suspensions.

"A number of students wore red shoes that can be identified with gangs . . . That looks good for Saturday, but not for school," Canton Public Schools Superintendent Dwight J. Luckett told WAPT Thursday.

One violating female student featured in the WAPT report wore black and turquoise Nikes; another, male, student had on gray Adidas with green stripes.

The handbook gives the school principal or her designee leeway to make judgment calls about what clothing is "inappropriate."

The handbook's list of prohibited garments includes boots with more than 2.5-inch heels, army and snow boots, stilettos, fishnet stocking or--underlined--"Any shoes having the colors that may be tied to gang membership, or can be deemed inappropriate by the principal or his/her designee."

Canton school employees also have a dress code, which requires men to wear neckties (custodians, maintenance and cafeteria workers, and technicians are exempt) and prohibits sexy or revealing clothing, jogging pants and clothing pertaining to fraternal organizations. With respect to shoes, the employee handbook bans the wearing of beach shoes, clogs, slippers and flip-flops, and sneakers by anyone other than coaches and gym teachers.

Bear Atwood, legal director for the Mississippi ACLU, said the civil liberties advocacy organization was keeping an eye on the situation in Canton. She wonders whether students received adequate notification of the school's dress policy. Canton school officials said the policy is outlined in the student/parent handbook, distributed at registration.

Atwood also said that students who qualify for free-and-reduced priced lunches may also qualify for a waiver from purchasing school supplies and uniforms. With the waiver, the school must provide the items families cannot afford. Because 92 percent of Canton students are eligible for free or reduced lunch, Atwood also questions whether the district tells parents they can apply for the waiver.

The Canton student handbook does mention the availability of waivers for school supplies but not the uniform.

The Canton footwear fracas follows another fashion controversy earlier in the week when the Hinds County Board of Supervisors held a hearing on a proposed ordinance to criminalizing the popular fashion of sagging one's trousers.

More than a dozen people spoke on District 5 Supervisor Kenneth Stokes' proposal to impose nominal $10 fines on anyone caught wearing their pants low in Hinds County.

"The way we get out of this jail problem is to give them some jobs," Stokes said Tuesday. "No one is going to hire you with your pants hanging down."

The ACLU staged a small demonstration to protest the proposal, which the organization considers an unconstitutional violation of free speech.

Asked how a governmental ban is different from a public school's dress code, Atwood said courts have determined that schools, as a different setting from a public sidewalk, may place restrictions on how people dress.

"Even though you don't lose your constitutional rights when you walk through the school door, they have more leeway," Atwood said. "In schools, there's a mandate that there's a orderly, conducive environment."

The Rev. Jesse Jackson Jr., who visited Jackson for the Jackson Public Schools convocation and addressed Stokes' proposal. If local leaders take their eyes off what's important in students' lives, Jackson said, "People will be arguing about sagging pants and not sagging (access to) computers. Sagging pants not sagging salaries."

Kids aren't getting jobs, because they aren't receiving an adequate education. It has nothing to do with saggy pants.

It's time for officials to stop getting caught up treating symptoms of the problem (crime, poverty, etc.) and start working to cure the disease.

Well, so long as the administrators are focused on what really matters ...

For now I'm going to not comment on the entire concept of public school uniforms, but given that Canton has one and the parents and kids are bound by it, what's wrong with people's reading comprehension?

If the dress code says "solid black, brown or white shoes," how are people getting confused? Another case of "the rules don't apply to me?"

The sad part about this is that these 100 students missed class time because the school adminstrators deemed their youthful cultural expression as "gang related" and deginerate. Yet, the school is almost useless and inept in preparing many of these kids for college and/or career and civci engagement as adults. Interesting to note that some students can apply for a waiver for their uniforms. I wonder how many of these parents will take advantage of that? And these adminstrators look like them and many of them come from similar or same types of backgraounds. Can we say cultural incompetence peddled as (inept) school policy?

All this astounds me. I can't even wrap my head around assuming a kid is a "thug" or a gang member because they're wearing colored sneakers (look at the Olympians!) or because they're following a saggy-pants trend.

This morning, a woman called here furious because our editorial cartoonist drew a kid with a Tigers logo wearing baggy pants and being yelled at by Kenny Stokes. The cartoon was criticizing Stokes, but not the kid, but she was yelling that we were making JSU look bad.

I guess she didn't get the cartoon or the JFP's stance on saggy pants. We weren't insulting the kid or Jackson State. WEARING SAGGY PANTS DOESN'T MAKE A KID A THUG.

I would have explained that to her had she stopped yelling and allowed me to talk. Instead, I hung up on her because I'm not sitting here waiting to be verbally abused. You want to talk to me, come willing to also listen. And what she would have heard is a defense of the kid.

Did she call back?

Not to my extension.

Donna I am sorry ignorant people don't understand stand or read before deciding to criticize and then can't do it in a civil manner. She apparently doesn't realize her behavior just made JSU look bad not the damn cartoon. Anyways, as a young mom (early 30s) of teens I have been reminding my friends how utterly ridiculous and "unhireable" we and the people we dated looked as teens. Those same friends now are nurses, run restaurants, have Phds, teachers, are in law school, stay at home moms with degrees, and business owners. Yes, indeed some of have traveled a harder road that has included unemployment, drugs, and imprisonment. Those events were not due to their clothes. It had to do with life effects and structural factors. If the city council and the school were truly concerned with these kids lives they would start addressing the system set up to criminalize being a teen. A system which makes it easy for you to became a return visitor for its services once you have been in. They fight the structural causes that make young people feel they need gangs vs. making up gang activity where there it none. They are choosing not to do any of those things. Those things take real work, planning, and cooperation. It is far easier to call parents stupid, teens lazy, disrespectful, rude, indecent, and thuggish and attack their dress style than to make real change. It is also easier to control low income student populations through oppressive policies than to fund better education to stimulate their minds.

Certainly, this caller did not speak for all of JSU, and we shouldn't take them as making JSU look bad. I don't even think she gave me her name, which I'm sure someone who worked for the university would.

Your comments, though, about how we treat young people, as well as structural causes, are very well taken. We need to believe in them, support them, mentor them, hold them to high standards -- and not assume that fashion fads indicate anything negative about them. The most confusing thing about the woman's anger to me is that she seemed to fully miss that the JFP has treated JSU as our local university from day one -- not our local black university -- and we are totally in support of it and have shown that editorially through the years. The point of the cartoon, and the editorial next to it, was precisely that we should not look at a kid wearing saggy pants and assume the worst about him or be shamed of him. Kids on all campuses wear saggy pants and clothes other folks don't dig -- but it doesn't make them "thugs" or anything else. It's the stereotypes we're fighting here -- everyone's.

Putting aside the hyperbolic title of this piece, school policies on uniforms appear less about curbing violence and more about reducing the accountability of educators and administrators in determining what is acceptable to wear on a school campus. Being able to point to a uniform dress code reduces the risk of school personnel being accused of passing judgment on kids clothing styles that some might deem an infringement on free expression. Given how challenged these schools are in trying to educate in an environment that is more hostile and disrespectful of authority than in times past, its no wonder that they take the position that they do against clothing that might be indicative of gang affiliation.