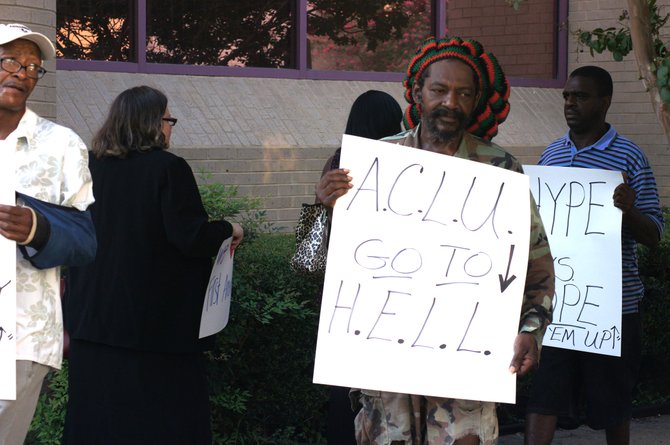 JACKSON — "I couldn't be further from the Southern Poverty Law Center and the ACLU, but I'm gonna vote the way y'all want," District 4 Supervisor Phil Fisher told an SPLC employee before this morning's hearing on a proposed countywide sagging pants ordinance.

Fisher, who believes the ordinance isn't enforceable, said he had to attend a gun show over the weekend just to get his conservative bearings back after siding with the ACLU and the SPLC.

More than a dozen people spoke on District 5 Supervisor Kenneth Stokes' proposal to impose nominal $10 fees on anyone caught wearing their pants low in Hinds County. Stokes characterized the popular fashion trend as indecent, disrespectful and reflective of a mindset that would choose backstage passes to a Jay-Z concert over a full Ivy League scholarship.

"The way we get out of this jail problem is to give them some jobs," Stokes said. "No one is going to hire you with your pants hanging down."

Limited employment prospects served as a common refrain for those who spoke in favor of Stokes' bans. Enoch Sanders, who wore tattered military fatigues that exposed his bare legs, said he hoped the anti-sagging ordinance would stop people from embarrassing themselves.

Sanders also participated in a protest where demonstrators carried signs equating sagging pants with public nudity and admonishing the American Civil Liberties Union, which staged its own rally against Stokes' ordinance this morning.

Bear Atwood, legal director for the Mississippi ACLU, said the dueling protests are what the First Amendment is all about. Atwood said sagging is also a form of constitutionally protected speech.

"Government cannot stop speech based on whether government likes it," Atwood said. She and other citizens who oppose the ban said the county should devote resources to youth community programs instead of what they describe as "criminalizing fashion."

District 3 Supervisor Peggy Hobson Calhoun and others questioned why supervisors haven't sought to ban popular female fashions that could also be considered indecent. Calhoun said she changed her stance from supporting the ordinance to opposing it.

Later in the meeting, supervisors voted to contract with White Construction to perform a needs assessment to repair a housing pod of the Hinds County Detention Center in Raymond destroyed during a disturbance last week.

Stokes--who has called for building a brand new county jail--objected, saying that the move looks like the board is running from its commitment to construct a new facility.

Calhoun said the board would have to issue a bond to raise the $60 million needed for a new jail, and it was necessary to make fixes to the existing facility in the meantime.

Stokes doubted the figure Calhoun quoted. "We don't need no $60 million jail. We don't need a jail with 1,200 beds. What are we going to do put everybody in jail?" Stokes said. "Robbers and murders, those are the people who need to be in jail."

While supervisor Stokes concerned about good role models and the future of Jackson's children is admirable perhaps he could lead the way by using proper English. One would think that elected leaders are thought of as role models right?

After listening to Stokes defend Melton's drunken attack on a duplex, urging teenagers to commit criminal activity, pardon me if I find his sentiments here a bit hollow and hypocritical.

Strikes me as typical political grandstanding. Obviously, the government can't tell citizens what they have to wear. Sheer absurdity and waste of public resources.

I'll give Stokes credit for saying what I and many adults are thinking about this utterly stupid fashion statement. But I think he's wrong for wasting time on an unenforceable ordinance.

Why give him credit though, credit for what? Not working on what really needs to be worked on like the jail BEFORE the riot. Being an opportunist who likes issues that sound good but do nothing as far as actual impact. He has been getting away with his dog and pony, don't look behind the curtain show for way too long. I say enough! If I have to go to every meeting to call him on his BS I will.

I'm not worried about the sagging pants, let's focus time and resources to motivate young people to want to do something with their lives. This ordinance is a complete waste of time, serves no purpose and does not accomplish what we would all like to see: YOUNG PEOPLE DOING SOMETHING GOOD WITH THEIR LIVES.

BTW, Fishers' comment about the gun show was a poor example in light of the recent massacres.

I agree maple and the thing is several of the kids doing positive things wear saggy pants. Many good fathers wear saggy pants. This whole issue has little to do with indecency and a whole lot to do with stereotypes, class, race, age, and people feeling they have the right to tell certain groups of people what to do.

Just another waste of time as many of you have already stated. Stokes is a lawyer and knows well that he does not have a legal leg to stand on. If he thinks that this is inappropriate dress, as many of us do, then why not start at home with his wife who covers her head with a BIG hat while trying to address the City's business. Is this unattractive and inappropriate? Yes, but, is it illegal, NO.

I am not a Stokes supporter, but he and I seem to share the same view of sagging pants.

I credit him for bringing attention to the issue and the fact that many people are offended by it.

But I do not support a legal ban. He may feel that the only way to stop it is by criminalizing it, but I think it will be difficult to enforce and will create more problems than it will solve.

I would like Stokes to produce just one child who has turned down an Ivy league scholarship for a backstage pass to a Jay-Z concert, or is that just vulgar hyperbole? It's certainly very insulting to young people.