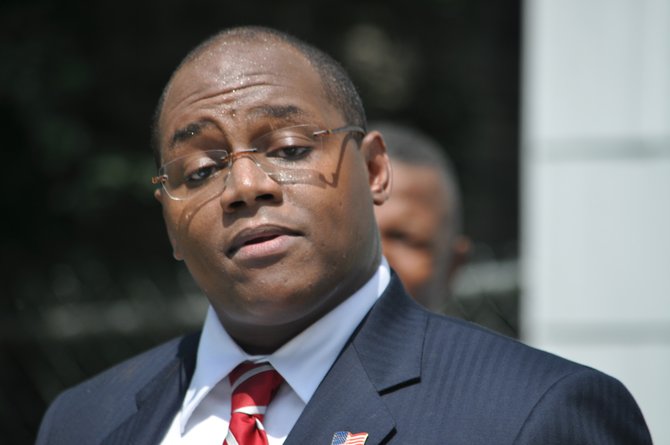 Lee said accusations that he was using the west Jackson forum as a political soapbox prompted the change. Lee, 34, officially announced his candidacy for Jackson mayor Tuesday.

Given his political aspirations, Lee said the chamber presented Friday Forum organizers with an ultimatum: Have Lee withdraw as moderator, or the chamber would yank its financial sponsorship.

"I will not step down," Lee told this morning's audience.

Lee suggested that the July 6 visit to the forum by Alcorn State University President Christopher Brown caused tension between the Chamber and City Hall. Before Brown's visit, he said the school would exercise its option to hold the popular Capital City Classic football game against archrival Jackson State University at its home stadium in Lorman this fall.

Jackson Mayor Harvey Johnson Jr.'s administration drew fire for not doing enough to keep the game, which is one of the city's largest events and a tremendous revenue generator.

"We can't pull the president of Alcorn out of our back pocket in three days to make the city of Jackson look bad," Lee said this morning, adding that Friday Forum guests are booked months ahead of time.

Calls to City Hall were not immediately returned this morning. David Watkins, president of the Jackson Chamber of Commerce, said he didn't know Lee was running until he saw the Jackson Free Press July 15 interview, which preceded Lee's official announcement.

Afterward, Watkins and other chamber executives asked Lee to step down as Friday Forum's host to avoid the appearance of impropriety at the officially nonpartisan forum. Watkins estimates the chamber provides $200 to $300 a week for food and other support of the event.

When Lee balked, the chamber decided to discontinue its underwriting of the event so that the chamber wouldn't be put in a position of having to defend itself against charges of political favoritism, Watkins said. He declined to comment on the purported dust-up with City Hall.

Watkins added that the chamber's minority outreach and community involvement would continue even though the organization is no longer sponsoring the forum. Lee said that Friday Forum is now looking for new sponsors.

I think it's fair for the chamber to ask Lee to step aside while he is a declared political candidate. Though it may not be intended, sponsorship could be seen as an endorsement of a candidate. This is not to say he's doing a bad job as a moderator. I haven't heard anyone say he wasn't good at it. Just an issue of fairness.

Jonathan has been great. He will be a great Mayor. While I agree with goldeneagle97, there's something fishy about why this all of a sudden became an issue. Is the Mayor's office really involved? Really?

Considering the forum's role in the community, it does make sense that the chamber didn't want to appear as if they were endorsing a mayoral candidate. What I don't get is why he didn't just step aside for a few months and keep the forum from losing a valuable sponsor. Why would it matter? He could still attend all of them and shake hands. Very odd choice, IMHO.

Donna, I don't typically read the JJ website but this was sent to me by a fellow friday forum attender, and is worth sharing in the "for what it's worth category."

I am a loyal weekly member of the Friday Koinonia Coffee Club group. I rarely miss each week. You all need some background. The Coffee Club at Koinonia started over 5 years ago. Dr. Bill Cooley, for almost 3 years, was the underwriter, and Jonathan Lee the moderator ($200 to 300 per week). About 2 years ago, the Jackson Chamber, the "toothless, step child of the Greater Chamber", approached the GJCP, requesting that the JCC underwrite this function. The GJCP agreed.

All was well until Nina Holbrook, with the "80 Coalition" (or whatever it is called), was the program a few weeks ago, and blamed Harvey Johnson for the collapse of the area, and the loss of Puckett Machinery to Rankin County. It appeared that the city anticipated this, and loaded the room with "newbies" (I come weekly and this was the first and only time many had come), and led by the insane Sam Begley, roasted Ms. Holbrook pretty good.

Than a few weeks later Dr. Chris Brown from ASU said bluntly that the reason the Cap. City Classic was moved from Jackson was due the the HJ administration and lack of cooperation financially and administrativly.

THAT WAS IT. HJ then preassued the JCC to withdraw financial support from the weekly organization Lee co-founded, thinking that if Lee didn't step down, the event would cease.

He and Cooley said HELL NO, Lee will not step down as this was and is NOT a COJ or JCC event, that, like everything else HJ does, must be spoon fed and totally controlled by HJ.

Come next week. You will enjoy it.

FREEDOM OF SPEECH is a pretty cool idea.

As for "what it's worth": The above is obviously an unconfirmed blog posting without attribution or a real name attached to it so I suggest taking it with a grain of salt until a journalist with a name attached has a chance to actually talk to people confirm it. That sounds like a spin from someone with an ax to grind.

I don't know the ins and outs beyond what we have reported using sources with real names who aren't afraid to use them (including Jonathan Lee). I said above that I find it odd that Jonathan didn't just step aside for the duration of the campaign to keep this great event controversy-free, and it seems like an odd political strategy for him to allow his refusal to not introduce speakers make it look like he and the chamber are at loggerheads--it's not like it's a major role to be an organizer of a forum. He could be visible there, shake hands, kiss babies, etc., without sitting at the front. But I don't really care either way. ;-) I'm merely an observer and found his response odd. It feels a bit like a tempest in a teapot from where I sit considering that it's just over who organizes a forum.

As for the Friday Forum, I've been a good number of times. Todd and I were early guests back when it was Dr. Cooley hosting it in the small side room and about 10 or 15 people regularly came. Since then, I've been the speaker along with Sandy Middleton a couple of different times, including a few weeks ago when I couldn't believe how packed it was. It certainly has grown.

It feels like it's been longer than two years that the Chamber has been a sponsor, but I'm not sure. I'd have to look through old email to see for sure, and as I said, I only care so much, and I have more important research to do right now.

In the early year or more, Dr. Cooley's assistant arranged guests and sent out all the invitations every week. Then Nicole McNamee of the Chamber was doing it for a long time. I hadn't realized that Jonathan was considered an "organizer" until a year or so ago. We communicated with him about our guest spot last year and this year a few weeks before we appeared, so he certainly may have been in an organizing role in recent years.

I love the forum and would come more often but I really don't have the luxury of getting out of the office on Friday mornings very often. But we've had a reporter at nearly every Friday forum for years now. Almost every Friday one of our Daily stories is about the talk. So we're well acquainted with it, and I'm well represented there. ;-)

Todd and I were also invited to come in and be part of a smaller gathering at Koinonia on Saturday mornings (8:30 or 9 a.m.?) fairly recently that is organized by Dr. Cooley and others. Jonathan was there for that one. People who have attended have told us that this gathering can get more political and be hard on the mayor, but I can't attest to that first hand. But it's not sponsored by anyone official as far as I know. It's much more casual.

I think the more forums, the better. But I can also see why the Chamber doesn't want to be seen as taking sides in the mayor's race if it is perceived that the Forum is a way to help Jonathan's campaign. And these days, Jonathan does play a prominent role in the forums although he didn't seem to in earlier years. And he's running for mayor. So their announcement is logical (even as I'm surprised to hear that David Watkins didn't know Jonathan was running for mayor until he saw it in the JFP!) Most people I know have known it for months.

I have also heard some people who attended the Friday Forum (who I don't know to support a particular candidate yet) say that it has seemed to get more political in the months that it's been known that Jonathan planned to run against the mayor, but I really can't say if that is true first hand. I would hope that the Forum organizers would openly invite the mayor and city officials in to talk to the group without it feeling like a political thing, per se. I don't remember the mayor speaking there, but I may just be blanking it, or he could have been invited and not gone. I really don't know. I can't imagine that he hasn't been invited. That would just be weird.

So that's about all I've got on the Friday Forum.

Asking Lee to step aside while he is a declared political candidate is the right and honorable thing to do.

Very succinct, blu. I should learn such brevity. ;-)