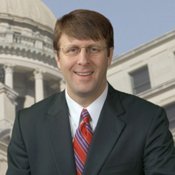 On its website, the Northeast Mississippi Daily Journal is reporting that Tollison may head to the GOP.

Several state Democrats and Republicans told the Jackson Free Press this morning that they've heard similar rumors of Tollison's impending defection or that they wouldn't be surprised if the information was accurate.

Considered by some political observers as a liberal, Tollison jumping ship might seem surprising, but his departure won't dramatically shift the balance of power in the Legislature's upper body where Republicans already hold the majority albeit a slim one.

The rumor mill about Tollison is in high gear today in light of a Mississippi Republican Party press conference this afternoon at party headquarters to discuss "a major development" for Republicans in the Mississippi Senate.

Still, the biggest question mark after Tuesday's election remains the composition of the House of Representatives where Republicans are hoping to wrest control from Democrats for the first time since Reconstruction.

Overnight, the race was called in House District 25 in favor of Republican challenger Gene Alday over incumbent Democratic state Rep. John Mayo. Meanwhile, the state Republican Party has declared victory in winning majorities in both houses of the Legislature.

Rickey Cole, the executive director of Mississippi Democratic Party, says it's early for Republicans to be jubilant.

"It's too close to call," Cole said. "The counties must first certify the results and send them to the secretary of state for final certification, a process that could take 10 days. Until the final election returns have been certified, we will not know with absolute certainty (who the winners and losers are)," Cole added.

Cole and other Democrats believe that even if they lose the House, opportunities exist to build coalitions with their Republican colleagues.

State Sen. John Hohrn, D-Jackson, said that if Republicans control both houses of the Legislature, Democrats will have to become more combative to hold the majority party in check.

Said Cole: "In a two-party system, the party that's in the minority serves as a check for those that are in the majority. It's their job to keep the other side honest."

Here's a statement that just came in from the Mississippi Democratic Party Executive Director Ricky Cole: The announcement today that state Senator Gray Tollison has decided to become a Republican is surprising to Democrats who know him. “Throughout his career, Senator Tollison has been a leading liberal voice in the State Senate. As a Democratic activist, Tollison and his law firm have strongly supported liberal candidates and causes for decades, helping to raising money and donating heavily to national liberals. A trial lawyer himself, he has been a vocal champion for trial lawyers in the legislature” said Rickey Cole, Executive Director of the Mississippi Democratic Party. “We understand that many factors probably played into his decision, and no doubt he searched his soul. But it will certainly be interesting to see how Senator Tollison reconciles his new-found partisan identity with his lifelong advocacy of liberal causes.” Even at this ironic occasion of a liberal becoming a Republican, the Mississippi Democratic Party remains the big-tent party. We welcome the participation and active support of every Mississippian who cares about the advancement of our Mississippi community, regardless of where their opinions on individual issues may fall along the ideological scale. We remain fully committed to a united effort at building a better Mississippi for everyone.”

Do others not find it somewhat disingenuous to run as a democrat, be reelected on Tuesday and switch parties two days later. I feel that is unethical if it is true and it certainly is not the legislator most of us know. I wonder what changed him if indeed this happened.

I'll tell you what happened, threats and promises. I'm sure it's no coincidence that his opponent was pulled off the ballot. What a complete lack of character.