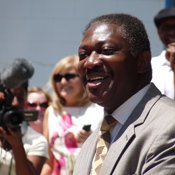 Sen. John Horhn, D-Jackson, and the city of Jackson still disagree over the power a commission has to dictate infrastructure repair over the next 20 years.

The city of Jackson and one of its state senators still disagree over the mechanics behind a localized 1-percent sales tax increase.

Sen. John Horhn, D-Jackson, and Jackson Public Policy Director Walter Zinn, who lobbies for the city during legislative sessions, disagreed at today's Friday Forum at Koinonia Coffee House about the power legislators gave to a commission over new revenue generated by a proposed tax increase.

Jackson Mayor Harvey Johnson Jr. called the commission "an insult" to locally elected officials, whose authority it "replaced," in an appearance on the Jackson Free Press radio show Thursday on WLEZ-FM. Johnson wrote a May 2 memo complaining that Mississippi Senate Bill 2389, which barely passed this legislative session after nearly dying in conference, mandates that a local chamber of commerce gets to appoint four members of a commission overseeing the expenditure of the new revenue. The four members must own businesses within the city, but they don't have to be residents. Mississippi's governor, lieutenant governor and the House of Representatives speaker each appoint a commission member, leaving Jackson's mayor with the power to appoint a minority party of only three members. The law requires that the commission establish a master plan for all streets, roads, sewage and drainage repair.

Johnson complains that the city needs more control over assembling the master plan for infrastructure repairs financed by the tax increase, since the tax is exclusive to Jackson residents. He has requested that the Greater Jackson Chamber of Commerce cede its appointment power to the city.

Horhn told the audience this morning that legislators gave the city a rare honor by ceding taxation power to the city in allowing a local referendum vote on the tax increase in the first place. (60 percent of Jackson residents must still approve the referendum before the new tax--which does not include food sales--can apply.)

The senator added that the commission did not hold all the cards in dictating the look of the plan because he believed the city council still gets to approve the master plan, before infrastructure repairs move forward.

Zinn had told the Jackson Free Press during earlier interviews, however, that the commission not only gets to create a master plan, but is also charged by the law to monitor the city to assure that the municipality adheres to the plan. The new state law allowing the referendum vote, he said, does not make clear the necessity of a council vote on the master plan.

This morning, Zinn got his chance to address that discrepancy, pointing it out to Horhn during the event. Horhn responded with a bit of confusion. "In order for you all to make the expenditures, the master plan has to be submitted (to the council). I think that's how the city process works, isn't it?" Horhn asked.

"But the city council does not approve the master plan that is developed by this commission," Zinn said, outlining in one sentence the major reason for Johnson's displeasure with the tax.

But Horhn and Zinn continued to disagree on whether or not the language in the new law allowed the commission to develop the master plan in conjunction with city public-works officials or utterly independent of them.

Zinn told Horhn that while the city "would appreciate" receiving that letter of legislative intent on city input, he suggested Horhn meet one-on-one with the mayor for the sake of clarity.

NOTE: Sen. John Horhn contacted the Jackson Free Press after the above story came out today to say that he did not intend to convey ignorance of the municipal legislative process with his question to Jackson Public Policy Director Walter Zinn stated above. In referencing the council's power to spend new revenue created by a 1-percent sales tax, Horhn made the statement: "In order for you all to make the expenditures, the master plan has to be submitted (to the council). I think that's how the city process works, isn't it?" Horhn said he'd intended that statement to be rhetorical. The Jackson Free Press will continue its investigation of this controversial law.