How much radioactive tritium did Grand Gulf release? 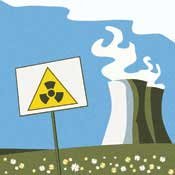 Entergy Nuclear, a division of Entergy Mississippi, and government officials do not know precisely how much radioactive water the company flushed into the Mississippi River last month.

Inspectors with the Nuclear Regulatory Commission were on site earlier this month at the Grand Gulf Nuclear Station in Port Gibson after Entergy Nuclear filed a report showing that workers flushed radioactive water into the river after heavy rains in the area.

Employees found the water April 29 at the unused Unit 2 turbine building, which is only partially constructed, and pumped what they believed to be harmless rainwater out of the building and into a channel bound for the river. An alarm alerted workers to the presence of the radiation in the water.

U.S. Nuclear Regulatory Commission public affairs officer Lara Uselding told the Jackson Free Press May 16 that the nature of the spill made it difficult to determine precisely how much of the isotope reached state water.

"We have inspectors following up on this. I'll send you any new information we have on that," Uselding said.

"Although the concentrations of tritium exceeded EPA drinking-water limits, the release should not represent a hazard to public health because of its dilution in the river," Uselding told the Natchez Democrat May 4, despite not knowing how much of the isotope was released before workers stopped flushing it from the turbine building.

The Nuclear Regulatory Commission classifies tritium as a "weakly radioactive isotope of the element hydrogen." Tritium has a half-life of 12.3 years, but the hydrogen atom bonds easily with the oxygen atom in water to create tritiated water, which is imperceptible by taste or smell, making it seem no different from regular water.

The NRC reports that Tritium is also used in some neon-glow paints, including the glowing hands of some wrist-watches.
Tritium, which is created by some nuclear reactors, was the basis for Vermont legislators' reluctance this year to extend Entergy Corp.'s license for its Vermont Yankee nuclear-power plant by another 20 years.

The Vermont Senate voted in 2010 to shut down the plant in 2012 due to pollution, after Entergy discovered tritium leaking from an underground pipe at the reactor. The full Vermont Legislature has yet to vote on the issue.

Even though the U.S. Nuclear Regulatory Commission said this month that it will extend Entergy Corp's license by another 20 years, without permission from the Vermont Legislature, the plant would still have to shut down in 2012.

The NRC determined in April that Grand Gulf "met all cornerstone objectives" in its 2010, yearlong performance review and that the facility "operated in a manner that preserved public health and safety."

Entergy Nuclear spokeswoman Suzanne Anderson said the company had not updated news of the event since the initial spill, but said no significant amount of radiation had escaped.

"It wasn't (spilling) for very long before tritium was discovered," Anderson said.

"The last estimate GE-Hitachi provided, in late 2008, was approximately 147 percent higher than their mid-2006 estimates," Hughey testified, adding that Entergy requested the Nuclear Regulatory Commission, which approves the construction of every nuclear plant, to suspend its consideration for the Grand Gulf 3 project Jan. 9, 2009.

The PSC did not render a decision on the issue at their May meeting, and is still considering the request.

The company proposes to create an "Allowance for Funds Used During Construction" account, which does not produce revenue for the company but will allow Entergy to get a return on its investment if the plant is ever included in the rate base.