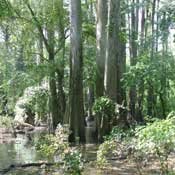 This swamp sits near the proposed site of a dry dam that advocates say is still the most feasible solution for a Jackson flood plan.

As the waters of the Mississippi River creep to a historic high, lapping at Vicksburg's ankles, some local residents are getting nervous about how long the city of Jackson has before it suffers the next round of its own flooding.

"What will the Mississippi flood have to do with us?" Gary Rhoads, Rankin-Hinds Pearl River Flood and Drainage Control District Board chairman, asked of engineers at the May 9 Levee Board meeting.

The answer is that the water swelling the Mississippi River does not share the much smaller drainage basin of the Pearl River, and is not a threat. Nevertheless, in 1979, the waters of the Pearl, swelling from the run-off of a host of storms north of Jackson, topped levees between Hinds and Rankin counties and inundated the downtown area and neighborhoods in the river's historic floodplain.

Members of the Levee Board, charged with handling flood control along the Pearl, are moving into position to begin a feasibility study on a flood-control plan that may involve a combination of a levee expansion and water-retaining lakes along the Pearl, but the estimated $4 million study is only the beginning, as local sponsors will have to tweak their plan through the process of federal review.

Their most recent endeavor, the Lower Lake Plan, is the latest survivor of five flood-control incarnations that bit the dust from lack of funding or support. The jury is still out on the cost of this most recent project, although the price could be anywhere between $200 million and $600 million, according to Levee Board members. The price depends on new expense requirements imposed by the National Environmental Policy Act process, through which the plan must pass before the feds will commit to co-financing. Out of all four previous plans, only one actually survived the federal government's scrutiny.

In 1984, the Corps jumped behind the construction of a dry dam near Carthage, Miss., as the most comprehensive flood-control option for the Pearl. A Corps report, dated March 17, 1986, said the total cost of the Shoccoe dam would be $80.1 million, with an estimated federal cost of $56 million and an estimated cost of $24 million for the local sponsor. The federal government even went so far as to pay its portion, with President Reagan signing the Water Resources Development Act authorizing the Shoccoe Dry Dam in 1986.

Some former USACE members consider the dam to be the best project on hand.

"In my opinion, it was the most viable option for preventing flooding in Jackson," said Tom Pullen, a U.S. Army Corps of Engineers retiree, whose Vicksburg branch peer-reviewed the Shoccoe project. "It wouldn't have been perfect, but it would've prevented most of the floods that hurt Jackson."

The project involved creating a dry dam near Carthage that would only kick in and act like a dam when a 1979-style body of water was on its way to Jackson. The dam would close and create a massive, temporary 38,850-acre lake on forest and farmland in Leake, Madison and Scott counties that would've otherwise occupied the city of Jackson.

The problem with the Shoccoe dam, however, was with area property owners.

Pullen said the Corps would purchase an easement from landowners that would allow the government to flood the land, but that landowners would still own their land and could use it, so long as it was compatible with the levee. Most of the flooding was in forest, meaning many of the growers affected were wood producers like the powerful International Paper Company, which Pullen said owned property in the area.

"They would've been paid an amount almost equal to the land, but they'd still own it. But it would still be a problem for them because of the chance of infrequent floods," Pullen said. "... Only a small part ... would be under government ownership."

"The Corps said, 'We'll pay you 20 cents on the dollar for a flood easement, but in the meantime, any structures on your property for human habitation would have to be removed at your expense.' Anybody versed in eminent-domain proceedings said they're taking away the economic value of your property," Miller said last year.

"Your property can't be used for anything else but a flood pool. So they're going to have to buy the title to your property. That increased the price tag of the project by about another $100 million."

Opponents to the Shoccoe project, including Rep. Bennett Malone, D-Carthage, and International Paper Company, managed to discourage the popularity of the local cost share of the project, despite the federal government's backing. The Shoccoe Dam died in 1987, one year after Reagan's signature, when the Mississippi Legislature voted down legislation authorizing the Pearl River Basin Development District to serve as the local sponsor for the project.

Being the only project that has so far survived the NEPA process, however, the dam could see life again. All it needs is the backing of a local sponsor with the will to move it forward.

"It could live again, but it's been so long that they would have to update the NEPA process, probably with a supplement to the environmental impact statement," Pullen said. "Either way, that was the only real solution we've come up with since 1979."