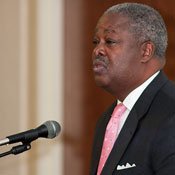 Jackson Mayor Harvey Johnson Jr. opposes part of a new state law allowing the city to levy a 1-percent sales tax increase on some businesses' sales. The tax, which would fund infrastructure repair, does not apply to retail sales of food at grocery stores and restaurants, or hotels or motels. Also exempt from the tax are fees collected by television and Internet service providers.

Prior to the tax taking effect, the city would hold a referendum vote. Three-fifths of Jackson's voters must approve the referendum vote before the new tax can apply.

Johnson does not oppose the potential new tax or the revenue derived from it, which he says is necessary. But the mayor is not happy with the make-up of a commission—that the new law creates—which would devise a plan for how the city would spend those funds.

A "local" chamber of commerce, possibly the Greater Jackson Chamber Partnership (the law does not specify), gets to appoint four members of the commission. Although the four members must own businesses within the city, they do not have to be residents. The state governor, lieutenant governor and the speaker of the Mississippi House of Representatives each get to appoint a single member to the commission, leaving the mayor with the power to appoint the three remaining members.

Johnson wants more influence over the four commission members the "local chamber" can appoint. Specifically, he is asking that the chamber confer to the city the power to appoint its four members.

"We are asking to bring those appointees to the Jackson City Council, to give the city the appointment power," city spokesman Chris Mims said.

Mims said the chamber could give that power to the city if the chamber adopts a resolution allowing it and the city of Jackson passes a municipal ordinance change to accept the chamber's resolution.

Under the law passed this legislative session, the new commission would not have to sign off on every city expenditure; however, Johnson argues that the commission still has too much power regarding where the city spends its own city-taxpayer-derived revenue.

"Although the commission is no longer vested with blanket power to approve all expenditure ties to local sales-tax revenues, the commission is now charged with establishing a master plan for streets and roads, water, sewer and drainage," Johnson wrote in a
May 2 statement.

Sen. Walter Michel, R-Jackson, questioned the city's desire for more influence over a commission governing the next 30 years of infrastructure repairs.

"The commission has some ongoing input, but previously (the state law) said they had to approve all expenditures. So it cut the legs out from under the commission, and (Johnson) still has a problem with it," Michel said. "This is a 30-year (tax) deal. He isn't going to be in office for 30 years. What if the next mayor isn't as responsible with money as him?"

Michel, who is not running for re-election this year, said the commission, under the new law, does not have the same power it originally carried, but is required to provide stability under multiple mayors. He added that the city was lucky to get permission from the Senate to allow the referendum vote at all.

"No other city has this same thing. This is something we've denied all the other cities," Michel said. "All the other cities want a local-option sales tax. They tried to get it statewide, but we never let them have that. The Jackson delegation had a knock-down-drag-out fight to get it passed, and now you want to remove the oversight provision of the deal, and that was one of the things that allowed it to get the one-vote majority to get it passed."

Johnson's Director of Policy Walter Zinn said the Legislature had passed a similar ballot initiative for the city of Tupelo in 1988, which did not contain a commission governing how the city spent the money. In any case, Zinn said the city had no trouble with the commission providing oversight, so long as it contained a majority of city-appointed members.

"We were willing to have the kind of commission set up by the 2009 law, which dictated how the money was spent.
We don't care that the commission exists, but it needs to be representative of the city," Zinn said.

The controversial commission was not a factor in the version of the legislation that left the Mississippi House of Representatives this session. Sen. John Horhn, D-Jackson, omitted the commission at Johnson's request, but the Senate put it back in.

Members of the Mississippi House of Representatives friendly with the mayor again removed the commission language, forcing the House and Senate to appoint representatives to hash out a mutually accepted version of the bill in conference in March.

What came out of the six-member conference committee contained the commission, at the demand of the Senate appointees.

"I don't know exactly what was going on over there. I said 'let's get it passed, whatever it takes,' and they said, 'we have to keep the commission,' so they kept it," said Rep. Credell Calhoun, D-Jackson, the lead conferee on the House side.