Reeves to Rule on Redistricting 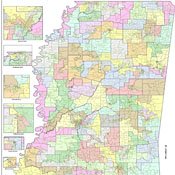 U.S. District Court Judge Carlton Reeves will preside over a controversial redistricting suit brought by the NAACP against the state of Mississippi. Judge Daniel P. Jordan, originally assigned to the case, recused himself yesterday.

"The court has just learned that a family member will be a candidate in one of the districts subject to this litigation," Jordan's order of recusal states. "To avoid the appearance of impropriety, it is appropriate under the standards set forth in 28 U.S.C. § 455 that the undersigned recuse himself from this case."

The change of judges could represent a shift regarding the state's redistricting debate, which comes down to Republicans demanding more Republican districts in the House of Representatives.

The Mississippi Senate and House of Representatives each draw redistricting maps subsequent to the U.S. Census every 10 years to redistribute the state's population evenly. Both chambers must gain approval of their maps from the opposite chamber; however, the Senate twice voted down a House redistricting map containing more black districts than Barbour preferred. House Speaker Billy McCoy, D-Rienzi, then sent the House plan to the U.S. Department of Justice, which must check each map for minority-voter dilution.

The approval hold-up means legislators may have to run twice this election year--once in their current districts, and again in new districts approved by the DOJ.

The NAACP filed a suit against Barbour and the state of Mississippi this month, demanding a hold on elections until the DOJ approves new districts. The NAACP also submitted for DOJ approval its own version of redistricting map as part of its suit..

A judicial panel containing one 5th Circuit Court of Appeals judge and two federal judges will eventually rule on the maps, and could defer to any number of maps proposed by Republicans, Democrats or the NAACP. Reeves, as presiding judge, will likely rule soon on the NAACP's Motion for Preliminary Injunction preventing elections from being held this year in the current districts.

UPDATE: Gov. Haley Babour's spokesperson Laura Hipp said Barbour is not involved in the redistricting process, either officially or unofficially. "His objection to the House plan is that it didn't account for population growth in Madison (County), Rankin (County) and Hattiesburg," Hipp told the Jackson Free Press.

Due to Judge Reeves' involvement in previous lawsuits involving redistricting and his working relationship with NAACP, he will (or at least should) recuse himself as well.