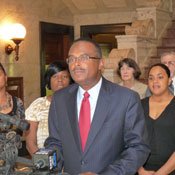 Mississippi could be losing incalculable millions in revenue through legal corporate tax-dodging.

"We can't really calculate the amount the state is missing out on," said Mississippi Economic Center Policy Director Ed Sivak. "We can't really come up with a number. That's why there isn't one."

Last week, children's advocates protested the fact that most of the state's largest corporations with the biggest payrolls duck out of paying potentially millions of dollars in state corporate income tax, while the governor and legislators toy with the idea of cutting the state's public-education and mental-health budget by more than $70 million.

"This is a slap in the face of people who work every day, who provide for their families and who pay their taxes," said Mississippi Revenue Coalition spokesman Gary Anderson, who joined members of the Children's Defense Fund and the Mississippi Economic Policy Center, among others, at a March 23 Capitol press conference.

PEER reports that many corporations take advantage of the state's generous assortment of tax credits that allow them to decrease their tax liability up to 50 percent, including a jobs tax credit, a skills-training tax credit and a broadband-technology tax credit. Other, more generous tax incentives include a Growth and Prosperity Program credit, which allows companies that create jobs in high-unemployment areas to enjoy a full state-tax exemption.

Anderson said some multi-state corporations with branches in Mississippi may use other tax-manipulation methods, such as placing their corporate headquarters in a different state, and then paying employees of their Mississippi subsidiaries through dividends, which are not taxed in Mississippi.

"Corporations have accountants who work all day trying to find ways to save them money," Anderson said. "They're very good at it."

WorldCom used a similar scheme involving subsidiaries to bilk the state out of taxes. For years, WorldCom packaged company leaders' brainpower—called "management foresight" as a commodity that could be bought and sold, similar to selling a patent. WorldCom sold "management foresight" to its subsidiaries all over the country for an amount of money almost equal to its net profits. "Management foresight," the company claimed, was non-taxable because the transfers were royalty payments, only taxable in Mississippi if the money was actually earned in Mississippi.

Attorney General Jim Hood disagreed, and he sued WorldCom. The company paid more than $120 million in cash and property to the state in a 2005 settlement.

PEER was unable to determine exactly how much money the state is losing from corporations exploiting the accounting loopholes legally available in the state. Much of the information it received from the Mississippi Department of Revenue, PEER explained, falls under the purview of Internal Revenue Code 6103(d), which PEER says "allows the use of information for tax administration purposes only."

"The IRC does not permit state tax agencies to furnish federal tax information to other state agencies, tax or non-tax, or to political subdivisions, for any purpose ... absent explicit legislative authority," PEER states in its review.

A 2003 John C. Stennis Institute of Government report, commissioned by the Children's Defense Fund, noted corporate taxes comprised 6.89 percent of the total revenue going to the state tax commission in 1998, and that this figure had dropped to 5.65 percent by 2003. Had corporations' share remained at 6.89 percent in 2003 they would have contributed an extra $65,290,759 to state coffers.

Mississippi Association of Educators Executive Director Frank Yates told the Jackson Free Press that the state of Alabama has a lesson to teach us. Alabama closed some of its corporate tax loopholes in 2001 and 2005 and, as a result, has since generated between $150 million and $200 million annually from national corporations such as Target, Walmart and Home Depot. Alabama Gov. Robert Bentley is considering a proposal to close even more loopholes this year.

Check out US Uncut (http://www.usuncut.org/)and Coffee Party USA (http://www.coffeepartyusa.com/)for ideas on what you can do to help fix the problems! Join the Reform Party (http://reformparty.org/) instead of the corrupt 2-party system. We will never close loopholes on corporate tax evasion while Republicans are in power. Coffee Party on Facebook - http://www.facebook.com/home.php?sk=lf#!/coffeeparty?ref=ts

Is the guy saying that the corporations haven't held up their end of the bargain by creating jobs or whatever the tax incentive was supposed to be for? Or is he implying that even taking legal tax exemptions is tax dodging? If it is the latter, aren't we all tax dodgers? lol

Just because something is legal, it certainly doesn't make it right. The problem is that there are way, way too many "legal loopholes" for corporations. Big oil is subsidized by tax dollars on one hand and are making record profits on the other. Same with food companies: 75 percent of farm subsidies go to 10 percent of food producers ... factory farms. Multi-nationals hide their assets in shell corporations on tax-free islands in the Caribbean. Wall Street banks received billions in tax-payer bail outs (from George W. Bush) and just a couple of years later, they have neither changed the way they do business (i.e., they continue to put the economy at risk daily), nor have they stopped paying obscene amounts of money to their executives. And many of them pay no income taxes whatsoever. These companies suck wealth out of America every day—they have whole departments dedicated to finding new, creative ways to "get around" paying taxes. That's hardly the same as taking a deduction on your personal income taxes. It's not even on the scale.

Sure, there are plenty of things that are legal that are just wrong. I would put the bail outs of the banks right up at the top of the list. I am with you that there are too many big corporate fat cats with sweetheart deals. Both parties do it and it's wrong every time. But we do want business and we do want jobs. Lawmakers pat themselves on the back when they land these deals with companies. They brag that they created x amount of jobs. Isn't there some kind of cost/ benefit analysis done to see if the deal is even any good? That we will grow our tax base, by adding taxpayers from new personnel and the jobs that spring around an industry, more than what we are giving up in the tax credit the company gets for adding the workers or opening the plant or whatever. Does anyone ever check that the jobs have been created? or the threshold was met for qualifying for the credit/ exemption in the first place?

We need a lot of tax reform in Mississippi. I am proposing to help businesses by eliminating the Inventory and Franchise taxes and exempting or reducing sales tax on business machinery and equipment. To make up for those items, I will broaden the sales tax base by reducing some service exemptions, reduce or eliminate some non-productive credits and exemptions, repeal the constitutionally questionable business capitol gains tax exemption and instead tax it at a low rate. I will also look at using Combined Reporting for out of state businesses to prevent them from leeching profits out of Mississippi and not paying appropriate taxes. Companies receiving tax credits for specific purposes - such as creating good paying jobs - will be held accountable for those credits and loose them if they do not meet minimum standards to qualify. Finally, I propose a 1% minimum tax rate. There will be only a 20k exemption for individuals and some kind of Payroll exemption for businesses. This would be a "least amount owed" instead of a new tax, meaning deductions and exemptions could not lower the tax bill below 1% of Gross Income after the first 20k. I currently pay 3.4% of my total income in state taxes after all my deductions. After the 20k exemption I propose, I would be paying 6.4%, so with myself as a comparison, I don't think this will affect the majority of tax payers at all. It will, however, make sure that everyone who can afford it is contributing something to running our state. The goal is to reduce paperwork, reduce complexity and fund the programs our state needs while trimming those programs we don't. http://bobbykearan.com/vote/ Question, Comment, Let your Voice be Heard.

There definitely needs to be a reduction of the grocery tax, one of the most (if not the most) regressive in the country.

Corporations that take advantage of legal loopholes are no different than individuals who take every available deduction and credit. Tax credits are one thing. Not paying taxes and still getting credits and refunds are quite another.

Not sure why we are targeting the corporations. Target the legislators. Also, lots of corporations are promised tax breaks by providing jobs just as WMartin mentioned. However, cases like Kelly's Kids takes it to a whole 'nuther level. Ask around if you want details of how they duped Mississippi.

Not sure why we are targeting the corporations. Target the legislators. Yep, that's what the corporations (and the U.S. Chamber) do. Works well for them, too, as we all know.

It'd be one thing if the corporations were using those "tax breaks" to create jobs. They're currently sitting on trillions of dollars in profits and are not using them to create jobs. Same with the banks. They're being spend-thrifts with credit (which, in regards to the collapse of 2008, may not be a bad thing, to a degree), thus lots of small businesses don't have access to capital to expand and create jobs. As far as the corporations not creating jobs, what's preventing them from doing so?