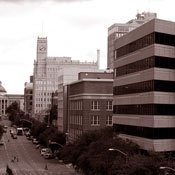 Sen. Hob Bryan, D-Amory, said he could not support a 1-cent sales-tax increase in Jackson to fund infrastructure repairs because the tax is too regressive, costing low-income residents proportionally more than those with higher incomes.

He added that Jackson's suburban businesses would inevitably benefit from the city's higher sales tax because shoppers will go outside the city limits to buy goods cheaper. "Local sales tax increases like this work to the disadvantage of the areas of the state that need it most and to the great advantage of those that need it least," Bryan told the Jackson Free Press today.

The Mississippi Legislature approved an identical bill during Mayor Frank Melton's administration. Recently, however, Mayor Harvey Johnson Jr. sought to change the law so that members of a commission overseeing the expenditure of the new revenue live inside the city of Jackson. The new bill, if signed by the governor, creates a commission whose members are appointed by the lieutenant governor, the governor, the speaker of the Mississippi House of Representatives and Jackson's mayor.

Since Mr. Bryan is opposed to the proposed sales tax, calling it regressive (and I don't disagree with that, or his points about suburban shopping), perhaps he should spearhead an effort to make the State waive its tax exempt status on its properties in Jackson, or at least make annual contributions to the City directly tied to municipal infrastructure improvements in lieu.

@ Jeff Lucas - I second that motion

Jeff, Byran is a vocal supporter of such a proposal.

Does any one really think the citizens of Jackson are going to vote to increase their taxes in this time of economic depression? The price of gas is sky high, many people have lost their jobs, many others are just getting by and are fearful of losing their jobs. People on fixed incomes are seeing their spending power shrinking. How does the city administration expect to sell this white elephant to the voters? If I were a betting man I would bet this tax increase vote will not get 40% of the voters voting for it.No matter what changes were made in the bill it has about a snowball's chance in h__l of getting voted into law.

Did the legislature pass a bill to let Brandon voters decide on a tax increase? What's different now except that it's Jackson and we all know how much the legislature loves Jackson. Sarcasm off.