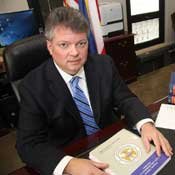 Attorney General Jim Hood said today's teens are the first generation to deal with an onslaught of electronic technology.

More Oversight Pending
State agencies will have to put their spending and contracts on a website for public scrutiny if the Mississippi House of Representatives and Senate work out their differences with a popular government accountability bill. Senate Bill 2554, the Mississippi Accountability and Transparency Act, survived a Senate floor vote last month, and also got past the House March 2, after some minor tweaking.

The original bill charges the state Department of Finance and Administration to develop and operate a website containing information on all state-agency expenditures. The House amendment, however, allows the Board of Trustees of State Institutions of Higher Learning to create its own IHL Accountability and Transparency website for its financial reports, audits, budgets and other financial documents.

The amendment means that legislators will have to negotiate the bill in conference. Both chambers widely approved the bill, co-authored by Sens. David Baria, D-Bay St. Louis, and Billy Hewes, R-Gulfport. House votes against the bill came from Republican Reps. John Moore, of Brandon; Gary Chism, of Columbus; and Rep. Mark Formby, R-Picayune.

Formby did not immediately return calls.

Barbour Vetoes College Funding
Funding for the state's community and junior colleges will have to wait for the Legislature's budget battle later in the session, as the Mississippi Senate let stand a Gov. Haley Barbour veto last week. Senate Bill 3042, which passed the state Senate and House of Representatives last month, allotted $226 million to the state's community colleges, but Barbour shot down the bill, arguing that legislators were moving too fast on higher-education appropriations.

"Signing this bill would be a premature action in light of the ongoing negotiations continuing among my office, the Mississippi House of Representatives and the Mississippi Senate. After all, there is not even agreement on the amount of revenue available for fiscal year 2012—much less an agreement on the amount of funding that state agencies should receive," Barbour said in his Feb. 3 veto message. "I believe it would be foolish budgeting policy to sign an appropriations bill tying the hands of budget negotiators during this difficult and important process."

Barbour added that his veto does not mean he will not support "additional monies" for the colleges, if legislators presented him with a budget that protected an unspecified amount of money in the state's budget reserves.

The lack of a veto-override attempt in the Senate followed unanimous support from senators in their Feb. 17 vote and a successful Feb. 24 vote with only three votes against the bill's passage. Senate leaders, however, decided to send the bill back to the Appropriations Committee, accepting the governor's veto without a fight.

A New Drug on the Out List
Cathinone derivatives, so-called "bath salts," are going on the state's watch list of controlled substances. Attorney General Jim Hood praised the Legislature for passing House Bill 1205, which restricts the sale of the drugs. The bill unanimously passed the Mississippi Senate last week and is heading to Barbour for his signature.

"These cathinone derivatives are dangerous chemicals that have been cleverly marketed as bath salts," Hood said in a statement. "They are known for producing a cocaine-like high that can last 10 times longer than cocaine."

Hood added that the bill, the Dewayne Crenshaw Act, is named after a Tippah County deputy sheriff who died last year from a gunshot wound delivered by a suspect that Hood believes had digested the targeted bath salts.

The bill puts cathinone derivatives in the "Schedule I" category for controlled substances, along with other drugs such as heroin and LSD, and restricts the sale, barter, transfer, manufacture, distribution, dispensing or possession with intent to sell of the substance. The bill delivers up to 30 years' imprisonment or a fine of no less than $5,000, or both, as punishment for the offense of carrying between 30 grams and one kilogram of a controlled substance classified in Schedule I or II. First time offenders with between 30 grams and a kilogram risk up to 20 years imprisonment, a $30,000 fine, or both, upon conviction.