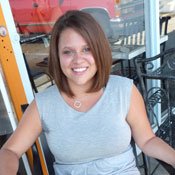 FIGMENT art event organizer Whitney Grant says the deadline for submitting an art project for the May 14 event is approaching.

Organizers of the May 14-15 FIGMENT art festival will host a party to rally support and participation for the event this weekend. At Koinonia Coffee House's Friday Forum this morning, FIGMENT Jackson Co-Producer Whitney Grant called Sunday's event with the Jackson Bike Advocates "a throw down with bikes, art making and music."

The "Party Potluck at the Plant on 80," runs from 3 p.m. to 8 p.m. at the FIGMENT site, a former Coca-Cola bottling plant on U.S. Highway 80. Grant said participants should bring paint, bikes, food and drink.

FIGMENT is a multi-city event that also touches down in Boston and New York in June. Grant said the event is based upon the weeklong annual "Burning Man" art festival in Nevada, where participants strive for self-reliance and individuality.

Organizers say the FIGMENT events work to avoid any form of economic exchange. Artists participate at their own cost and sell nothing. Visitors, likewise, should not expect to make any purchases while touring the FIGMENT event.

"You're not allowed to sell or buy anything. You can bring your own picnic. All we can supply is water," Grant said. "If you want to trade art, that's fine, but there's no commerce on the site."

Grant said the type of art featured at the event will include installation art and performance art. Jackson artist Robert Mann said the facility offers 12 acres of space for artists to build just about any project they care to try. FIGMENT events in other cities, such as New York, occasionally feature art more than a story tall--all of it interactive. One notable piece was actually a room-filling musical instrument that participants could play.

Mann said FIGMENT is "all about inclusion." Anyone, he said, is considered an artist, and organizers don't discriminate between what art goes or stays.

"We picked the industrial park because in most cities where the event happens, it goes to places that the city wants to enliven, and the old industrial park is a good target. It has lots of space," Grant said. "All we ask is that if you don't submit any art that you come willing to participate with those who do."

Another presentation in a previous FIGMENT event, for example, featured a "gnome adoption booth" where participants received their own ceramic gnome in exchange for agreeing to take a picture of the gnome in its new home.

Organizers are soliciting proposals for installations and performances. The deadline to submit a project for FIGMENT is April 15.

"The official opening date to install projects is May 11," Grant said. "We're opening the site now to start making (projects) and storing them there."

Prospective participants in either the Sunday potluck or FIGMENT can e-mail Grant at [e-mail missing]. Visit jackson.figmentproject.org for more information or to submit a project.