Taking the Side of Unions | Jackson Free Press | Jackson, MS

Taking the Side of Unions 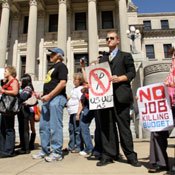 Rallies supporting Wisconsin union workers clashed with members of the Mississippi Tea Party at the Capitol this week.

Hundreds of protesters continued to fill the Wisconsin state Capitol Tuesday over the governor's proposal to bust the state union. To show solidarity with workers to the north, a 70-member group representing the Mississippi Alliance of State Employees appeared in the state Capitol on Monday, arguing that state governors are wrongly blaming their employees for mounting state deficits.

"Instead of the focus being on soaring profits of corporations who refuse to hire more workers, Wall Street bonuses, (and private-equity managers whose income is treated as capital gains or business loopholes ... all across the country, public workers have become the convenient scapegoats for budget battles," said Mississippi Alliance of State Employees President Brenda Scott.

Nancy Kent, president of the American Federation of Teachers' Mississippi branch, said teachers all across the state are seeing salary cuts to cover budget shortfalls.

"Teachers have lost salaries through furloughs," Kent said. "If you don't work, you don't get paid. If you get a furlough, you're not getting paid. When you lose $9,000 in pay from one year to the next, that has to hurt."

Jackson Public Schools spokeswoman Peggy Hampton, who was not at the rally, said the local district reduced Jackson Public Schools teacher workdays from 191 days to 187 days this fiscal year. Even though the cuts did cost teachers money, the reduction did not count as a furlough, Hampton said, because teacher contracts were originally set for 191 days, four days over the state-mandated school year of 187 school days. Hampton said teachers also had the benefit of timely pay increases to soften the four-day salary loss.

The district also cut administrators' work year by four days this year. Administrators, she said, did not have the benefit of regular pay increases to counter the salary decrease.

Opposing protestors also converged on the state Capitol Saturday as local and out-of-town supporters of fair-taxation group US Uncut and moveon.org--who were showing solidarity with Wisconsin union workers--faced members of the Mississippi Tea Party.

"(The Mississippi Tea Party members) were on the grounds and just kind of heckled the speakers. I gave a five-minute speech and, of course, they heckled me," said US Uncut organizer Carl Gibson, a former Mississippi Public Broadcasting reporter who has also freelanced for the Jackson Free Press.

Gibson, a Jackson resident, gathered about 15 US Uncut members together earlier Saturday at the FedEx store on County Line Road to protest FedEx's use of offshore offices to qualify for a reduced federal tax rate. The U.S. Government Accountability Office issued a 2008 report revealing that 83 of the 100 largest publicly traded U.S. companies reported having subsidiaries in "jurisdictions listed as tax havens" such as the Cayman Islands and Singapore. FedEx generated $35 billion in 2007, which includes 21 off-shore locations in places like Bermuda, Costa Rica and Grenada. Congress has no plans to change the corporate tax cuts despite continued calls for painful budget cuts by Republicans. Risk management company Moody's analytics released a report last month predicting the Republican-backed federal budget would cost the nation at least 700,000 jobs by 2012.

Gibson organized the local protest in conjunction with 50 other US Uncut protests throughout the country Saturday. Gibson started US Uncut after learning about UK Uncut, a movement in the United Kingdom that uses grassroots organizing and social media to protest corporate tax disparities.

"These budgets cuts do not have to happen. Mississippi, alone, through federal funds, could recoup about $432 million in lost tax revenue if corporate tax-dodgers paid up," Gibson said.

Gibson said the US Uncut message squared perfectly with the message that about 50 moveon.org members from across the state promoted at the state Capitol. Moveon.org members were already facing a Mississippi Tea Party counter rally..

Oxford resident Betsy Chapman, a US Uncut supporter who attended the Capitol rally, said she was dismayed by the number of jeers from Tea Party members as pro union and pro-fair-tax speakers spoke.

"It's pretty disheartening for me to see people out there who are part of the middle class fighting on that side. It's hard for me to understand why they take the (stand) they do on these issues, and equate the unions with socialism and atheism," said Chapman, whose husband, Louis Bourgeois, was laid off from his position as an adjunct English professor at the University of Mississippi two years ago and no longer qualifies for unemployment benefits.