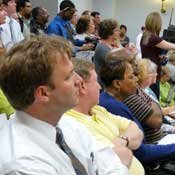 About 100 people crowded into the Hinds County Board of Supervisors chambers last night to discuss supervisors' pick for a new districting plan following population changes recorded by the U.S. Census Bureau.

This story has been updated to reflect a clarification.

Hinds County Board of Supervisors picked a new county redistricting plan Monday night, even as critics complained that the board did not make all of the maps under consideration available for examination until the day of the meeting.

More than 100 visitors crowded into the Hinds County Board of Supervisors meeting room last night, many of them complaining that supervisors put three potential district maps on the county website earlier in the day, but only made available Hinds County Proposal 1--the proposal the board actually picked--much later that day.

The county paid consultant and Mississippi NAACP President Derrick Johnson $40,000 to oversee the redistricting process, which included producing four maps rendering the potential new voting precincts of the county. But Johnson said several factors prevented him from producing the maps earlier such as inaccurate Census geography files for the drawing of precinct lines, and waiting until the second week in February for the Census Bureau to release data.

"The Census Bureau requested over three years ago from each jurisdiction of the county information about the geographical boundary lines of their precinct. Unfortunately, Hinds County Election Commissioners didn't provide accurate information (the precinct lines) to the Census Bureau, therefore the files that were created by the Census Bureau ... aren't accurate."

Hinds County Supervisor Robert Graham said the board had no choice but to approve a plan that night, despite the short notice: "We have to be able to vote tonight so we won't have to run (for our seats) twice," Graham said.

"Last week you held a public hearing with no information, so it was very difficult to comment on information you didn't have. Then there was the lack of availability of the maps," Aultman told the board during the nearly two-hour meeting. She added that "nobody from the county" contacted her about redistricting.

Supervisors must approve a plan that accounts for the one-person, one-vote rule and prevents the population of any district from being more than 10 percent larger than any other district. Population decreased in District 2, which contains Bolton, Edwards, Utica and other rural areas, which necessitates adding neighboring populations from places like Learned and Raymond, which formerly resided entirely in District 4. The plan also shifts some of Clinton's population (specifically Clinton 1) to District 2.

Despite losing some territory to District 2, District 4 will retain its white majority population at 50.68 percent, even though its entire population will drop from 53,396 to 48,635.

For of the five supervisors approved Proposal 1. District 4 Supervisor Phil Fisher, R-Clinton, who monitored the vote by teleconference from Afghanistan, where he is currently stationed by the military, voted against the plan.

"Of the plans they were going to change, it's not the worst option. It's not as bad as it could be," said Roger Davis, who ran against Graham in the last election. Davis told the Jackson Free Press, however, that he still has "a much worse chance" of winning against Graham in the next election if he ran again because of the district change. District 2, it appears, also consumes a small portion of the north Jackson area in the approved plan.

The district change only affects local elections, and has no impact upon statewide elections.

Clarification: NAACP President Derrick Johnson did not mean to imply that the U.S. Census Bureau delivered an inaccurate count of the population of Hinds County. The Census Bureau provided incorrect geography information for the drawing of precinct lines.

I don't guess it's a surprise that the membership of the JFP is not up in arms about this entire mess. For your viewers, peruse the C-L website where comments have been flowing for days over this issue. Of course, the main complaints center over the amazing and brazen lack of transparency exhibited by the Hinds County Board of Supervisors and their hiring of state NAACP president Derrick Johnson (at twice the going rate) to draw the new district lines. Notices of board meetings, opportunities to view all of the proposed maps and discussion with city/county leaders, and appropriate time given to view/discuss the actual adopted plan (which was privy only to Supervisors prior to the meeting) - none of this was afforded the citizens of Hinds County.

Darryl, we don't suggest that anyone read the anonymous trash that passes as "comments" on The Clarion-Ledger website. Wear armor if you dare.