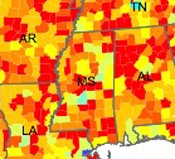 Some Mississippi counties rate behind developing nations in terms of life expectancy, a new study says.

Mississippi is churning out low life expectancies when compared to some developing nations, and not because of violent living.

A June 15 study released by the Institute for Health Metrics and Evaluation reports that five counties in Mississippi have the lowest life expectancies for women in the United States, all below 74.5 years. That scale puts them behind nations that some Mississippians typically link to squalor, including Honduras, El Salvador and Peru.

Life expectancy for men is equally dismal, with four of those Mississippi counties, along with Humphreys County, havig the lowest life expectancies for men below 67 years. That puts them behind the nations of Brazil, Latvia and the Philippines.

"We are finally able to answer the question of how the U.S. fares in comparison to its peers globally," said IHME Director and study co-author Dr. Christopher Murray in a statement. "Despite the fact that the U.S. spends more per capita than any other nation on health, eight out of every 10 counties are not keeping pace in terms of health outcomes. That's a staggering statistic."

Authors suggest some factors include the lack of disease prevention, including a diet containing less fat and more activity, and say government intervention can conceivably make a difference.

"National, state or even local policies may be effective for banning trans-fat and regulating salt in packaged and prepared food, tobacco and alcohol taxes and control, increasing financial and physical access to healthier diets such as omega-3 fatty acids and fruits and vegetables, and authorizing the use of incentives by employers, insurers, and others for risk factor modification," the report states.

The study proclaims that a health-care system that pushes disease prevention "would not be easy" to create, but should prove a target that is "technically possible and could make a major impact" on U.S. life expectancy rates at the national and local levels.

Melody Moody, executive director of bicycling advocacy group Bike Walk Mississippi said Mississippi's sedentary lifestyle is a major concern.
"It's our culture, really," Moody said. "I don't think we see activity as fun. We see it as a chore, and as southerners it's easier for us to take it easy and slow, and we love our southern cooking. It makes us who we are, but it also hurts us in the end."

Moody suggested parents work with their children early on to keep them active and mindful of their diet in order to reduce incidents of childhood obesity, which children often carry into their adult years. She also encouraged local towns and cities to put more emphasis upon the creation of sidewalks, and biking and walking trails, so that traveling upon foot becomes more of a regularity and less of an anomaly. She said many Mississippians consider pedestrian travel as a last resort when they should be inserting it as much as possible into their lifestyle.

Here is an blog article that may explain some of the reasons behind the story : (its a two-parter) http://www.angrybearblog.com/2011/06/medicare-sky-is-falling.html and http://www.angrybearblog.com/2011/06/medicare-sky-is-falling-part-2.html I believe that we, as Mississippians, can come up with a workable solution and improve our state's standings. All it takes is the courage to step away from the same-old habits and do something a bit different - you know, fix the problems without creating new ones. http://bobbykearan.com/vote/