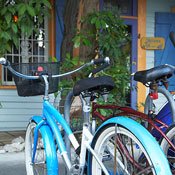 The plan, released yesterday, includes a "bicycle and pedestrian facilities plan" that spans 25 years. Developing new biking and walking trails throughout Jackson is a major component.

Larry Smith, director of planning for the district, said members want to help make the Jackson area more "multi-mobile." The goal is to encourage a combination of transportation modes.

"The idea is that you could ride your bike for part of your route, then get on the bus, put your bike in the bike rack, and ride the bus the rest of the way," Smith said.

"I think people are so concerned about this because it effects their daily lives," Smith said. "And especially with the new emphasis on health and exercise, I think this is really important

Smith added that JATRAN's buses do not have space for passengers to store their bikes, yet.

"From what I understand, that's something the city of Jackson has to work on," he said. " I think they're planning to put racks on as many buses as they can afford."

Smith could not give a timeline for when the buses would be equipped with bike racks to complete the overall "multi-mobile" goal of the plan. He said it would take cooperation and support from city and county governments to make the plan a success.

Small correction (I mean no offense)by this but at the press conference they were referring to a "multi-modal" plan as opposed to "multi-mobile".

This is really great news for the city of Jackson! A few ways you can help make this a reality is by giving your feedback. The Jackson Bike Advocates are collecting a list of: 1. Most traveled routes by bicycle (this will help the Central MS Planning Organization prioritize) and 2. The JTran wants to know the top three Jtran routes that people want them to put bike racks on first. Send your ideas for both of these to: [email protected] Let your voice be heard and let's be part of the solution! -Melody

Hmm... what are the chances of a Bus/Bike route from South Brandon to Downtown Jackson? :) Certainly make my commute less expensive.

BobbyKearan, I am a cyclist living in Brandon as well. Do we have a local bike advocacy group in our city?? I really wish the multiuse trail would be extended off 471 to come on over to downtown area, Shiloh Park and other areas of town as well. Time for us to organize and turn up the heat on our local officials. Its a bit of a commute for me to drag my bike out to the Rez area for a full workout.

This is a cool idea. Why does Jatran not go out of the city? It seems like there would be more ridership if service was available to more people and served more destinations?

Sometimes, suburbs are resistant to mass transit. I don't know if this is the case with JATRAN. Has the city even tried to reach out to the surround communities?

AMEN... Jatran is so "weak" in terms of schedules and routes. They need to look at improving mass transit in this area. Change the name to MetroTran and give us a chance to ride to Northpark or Flowood for shopping and Trustmark Park for a game. Our officials are so insular in their thinking. Local governments in this area don't think regionally, but rather locally, "I don't want anything to do with them" & they need to get away from that.