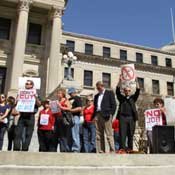 Members of fair taxation group US Uncut joined with moveon.org members supporting Wisconsin union workers at the state Capitol on Saturday, where they clashed with members of the Mississippi Tea Party.

Opposing rallies connected at the state Capitol Saturday as members of fair taxation group US Uncut and moveon.org, who were showing solidarity with Wisconsin union workers, faced members of the Mississippi Tea Party.

"(The Mississippi Tea Party members) were on the grounds and just kind of heckled the speakers. I gave a five-minute speech and, of course, they heckled me," said US Uncut organizer and Jackson Free Press freelancer Carl Gibson. "Afterwards I walked up to one of them and told him what we were all about, and they reluctantly agreed that everyone should pay their fair share of taxes, but they wouldn't have anything to do with us after that."

Gibson gathered about 15 US Uncut members together earlier Saturday at the FedEx outlet store on County Line Road to protest FedEx's use of offshore offices to qualify for a reduced federal tax rate. The U.S. Government Accountability Office issued a 2008 report revealing that 83 of the 100 largest publicly traded U.S. companies reported having subsidiaries in "jurisdictions listed as tax havens" such as Bermuda, the Cayman Islands and Singapore. FedEx generated $35 billion in 2007 including at 21 off-shore locations in places like Bermuda, Costa Rica and Grenada.

Gibson, a Jackson resident, organized the local protest in conjunction with 50 other US Uncut protests throughout the country on Saturday. Gibson started US Uncut earlier this month after learning about UK Uncut, a movement in the United Kingdom that uses grassroots organizing and social media to protest corporate tax disparities.

"These budgets cuts do not have to happen. Mississippi, alone, through federal funds, could recoup about $432 million in lost tax revenue if corporate tax-dodgers paid up," Gibson said. "So in a matter of two fiscal years, Mississippi's fiscal crisis, the classroom shortages, the layoffs of teachers and firefighters and police officers--none of that would have to happen if we just collected the revenue that is owed to us by corporations."

Gibson said the US Uncut message squared perfectly with the message the approximate 50 moveon.org members promoted at the state Capitol. The members rallied in support of Wisconsin state employees, who are protesting Wisconsin Gov. Scott Walker's proposed budget that would eliminate unions' collective bargaining rights. Moveon.org members met at the state Capitol, and were already facing a Mississippi Tea Party counter rally. US Uncut members, like moveon.org protestors, faced the same catcalls from the surrounding crowd.

Oxford resident Betsy Chapman, a US Uncut supporter who attended the Capitol rally, said she was dismayed by the number of jeers from tea-party members as pro union and pro-fair tax speakers spoke.

"It's pretty disheartening for me to see people out there who are part of the middle class fighting on that side. It's hard for me to understand why they take the issue they do on these issues, and equate the unions with socialism and atheism," said Chapman, whose husband Louis Bourgeois was laid off from his position as an adjunct English professor at the University of Mississippi two years ago and no longer qualifies for unemployment benefits.

Tea Party members, however, argue that many private industries are facing cut backs and teachers and other public employees should be no exception.

"Teachers are valuable, but they're no more valuable than any other profession in the workforce," MS Tea Party Chairman Roy Nicholson told WJTV Saturday.

I was there, mostly for Coffee Party USA (and US Uncut and The Other 98% as well as Moveon.org). Roy of the Tea Party came up and made a statement that they were all for Unions - but wanted the Teachers to pay for their pension and health insurance, not tax payers. As most tea party people, he was very misinformed. They agreed to take the 7% reduction in compensation - which the pension is a deferred compensation to make up for the pitiful salary they get. The only issue is Walker and other GOPers wanting to take away collective bargaining rights. http://bobbyshead.blogspot.com for more.

I was there and it was quite impressive to see the people of Wisconsin lobby the Govt. in a civil manner, quite a change from what the tea party did during the healthcare debate.

All, Make sre yu guys watch Direct Line tonight at 7pm on Comcast 14. We'll be talking about Unions and the events in Wisconsin and Ohio. and the confrontation here in MS. Brenda Scott will be one of my guests. You can call in (its Live) 601 914 0064

Sanity, what are you talking about? Protesters in Wisconsin ranged from peaceful, I'm sure yes, to people with signs with "Target sights" on Gov Walker's face as well as pictures portraying the Governor as Hitler. Yeah, real peaceful. But to make a blanket statement like yours is simply ignorant.

RobbieR, I'm not sure that is a "blanket statement" if there haven't been images of Wisconsin protesters doing the kinds of things that many Tea Partiers do. Have you actually seen those "target" signs or heard anyone call the governor "Hitler"? Not saying you haven't, but your post sounds like you're making assumptions. Right after Columbine massacre in Colorado, I covered protests against the huge NRA gathering in downtown Denver. Thousands of people -- mostly middle-class moms and dads and their kids -- joined hands and ringed the hotel in silent protest. I heard not one ugly thing said all day, and I was all over that protest as a reporter. You see, many people protest without resorting to the kind of nastiness we routinely hear out of Tea Party rallies. If you don't like that ugliness, don't try to deny or assume that everyone rolls that way, speak out against it. The Koch brothers have funded some really ugly Tea Party protests to date, and that's fact. It is also fact that they are helping fund the effort to kill unions in Wisconsin (and elsewhere). That's mighty ugly coming from massive corporation owners, no?

It is so sad to see people fighting against things that have helped and will continue to help the work force. Are these Tea Party folks aware of some simple Union facts: The Union is responsible for minimum wages, 8hr. work days, child labor protection laws,overtime, vacations, medical and family leave.and the list goes on. How could you not support their ability to negotiate. The workers in Wisconsin gave up everything, but, continue to fight for their right to be at the bargaining table. Just think back to a place and time in our history that we were without some of the above mentioned benefits. I continue to ask this question: Where were these folks when George Bush was in office?

I continue to ask this question: Where were these folks when George Bush was in office? Jess, your speaking with logic! Nobody wants to hear that, give'em a healthy dose of ignorance and they might catch onto you. With the sarcism aside, I agree with your question - but it's too logical for some to answer.