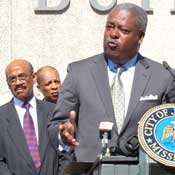 Jackson Mayor Harvey Johnson Jr. wants a local chamber of commerce to hand some appointment powers to the city regarding a new commission overseeing infrastructure development.

Jackson Mayor Harvey Johnson Jr. signed on with other mayors across the country yesterday to urge Congress not to pass the budget, which contains up to 25 percent in cuts to Community Development Block Grants. House Republicans proposed a $2.9 billion cut for the current year to the Community Development Fund, while a group of House conservatives are pushing to end the program entirely.

Johnson said the city of Jackson used CDBG money for economic development and financial assistance to businesses and created an estimated 240 new full-time jobs and preserved another 210 full-time jobs over a five-year period.

Within the last five years, the city spent $2.7 million on public improvements including street and water and sewer improvements, and development of parks and recreation. Also within five years, the city spent another $1.8 million on public services, such as senior and youth projects, employment training, and services for neglected or abused children.

"CDBG is one of the most effective federal domestic programs to revitalize neighborhoods with proven results," Johnson stated in a letter to U.S. Rep. Gregg Harper, R-Miss.

The National Campaign to Prevent Teen and Unplanned Pregnancy states that the proposed cuts in the House budget will also eliminate the Evidence-Based Teen Pregnancy Prevention Initiative at the Office of Adolescent Health and eliminate the Title X Family Planning Program, which received $317.5 million in fiscal year 2010. The budget proposal also reduces funding for the Centers for Disease Control and Prevention by $850 million and reduces funding for the Maternal and Child Health Block Grant by $50 million and takes $1 billion from nationwide Community Health Centers.

Jamie Holcomb, program director for the Women's Fund of Mississippi, said the cuts could result in poorer health quality among women.

"In general, the cuts to family planning are very short-sighted. These are the programs that provide medical care to low-income women, and these are often the only options they have, so I'm not sure why it would make sense to cut programs that would reduce cancer, reduce HPV, AIDS and provide medical care like pap smears, ... (and) prevent unwanted pregnancies," Holcomb said. "If you want to reduce the abortion rate, which I'm sure most Mississippians do, I would think that family planning would be one crucial tool."

Mississippi only has one Planned Parenthood center, which does not receive funds for the federal Title X family planning program, which provides family planning services and health care for women, said Planned Parenthood Southeast Public Policy Director Felicia Brown-Williams. However, Brown-Williams said that cutting the Title X funding would cost the nation more money in the long run.

"For every public dollar invested in family planning, taxpayers save $3.74. By eliminating the Title X, over 5 million women across the country will lose access to basic primary and preventive health care. ... Six in ten women who access care from a family planning health center consider it to be their main source of health care," Brown-Williams said in a statement.

Brown-Williams said that by helping women avoid unintended pregnancies, Title X - supported centers in Mississippi saved $23,421,000 in public funds in 2008, and that the abortion rate in the state would be 68 percent higher without Title X services.

Much of the money reaches the state's women and children through local health clinics, like the District 5 health clinic in the Jackson Medical Mall, on Woodrow Wilson, and a clinic on Lynch Street. Brown-Williams added that the cut would "impact 106 health departments and community health centers across the state," and that these services helped women in Mississippi "avoid 12,700 unintended pregnancies, which would have resulted in 5,600 births and 5,300 abortions," in 2008.

The bill must still survive the Senate, but Senate Majority Leader Harry Reid, D-Nev., is not a supporter. Jon Summers spokesman for Reid told reporters recently that the House budget proposal was not "a compromise," but a "hardening of (Republicans') ... original position."

...and the beat goes on. The Party of "NO" continues to make life miserable for citizens. These cuts, if passed, will not only effect the lives of many, many Mississippians, but, will have a drastic problem for people across the nation. Fight Johnson, FIGHT!!!!

Don't forget the rally at the Capitol tomorrow at NOON. This is a nation wide event to support Wisconsin and Unions around the country.