Strength from the Old Ways 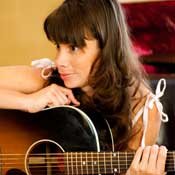 Music, motherhood, quilts and homemade pickles define Valley Gordon. Her worn guitar case proudly displays a sticker that reads "Old Time Music." Gordon, 34, has played guitar since she was 15. Many old-time musicians left their mark on her career, especially Elizabeth Cotten and Algia Mae Hinton, whom she considers role models.

"Both of those women played traditional, old-time music, but it was in a time when women really weren't a part of the music scene," Gordon says.

Gordon can relate. She's the single mother of two daughters (Pearl, 4, and Ruby, 6) and works as a labor and delivery nurse at Baptist Health Systems in Jackson. Yet, she makes time to play old-time music, a traditional genre that she says blends the blues and the bluegrass, incorporating America's white and black influences.

When Gordon got her first guitar, she began listening to the Carter Family, one of the first country bands that evolved out of folk music. She has played back-up bass with lots of local musicians, including Taylor Hildebrand and Jamie Weems, and she's been in several local bands, such as Horse Trailer, The Scramblers and Hot Tamales.

Recently, she decided to get back to the music style she loves through her new act, Li'l Miss So & So. "It's my invention of playing old-timey tunes and writing. It allows my voice to be who I really am through storytelling," she says.

During our interview, Gordon sang "My Time to Ride," a song about getting away from domestic violence, and her voice had an antique, rustic quality.

Gordon grew up in Brandon and graduated from Northwest Rankin High School. At 21, she received a nursing degree from the University of Mississippi. Gordon then took a nursing job in Asheville, N.C., a city she describes as a mecca of old-time music.

A couple of years later, she moved to Austin, Texas, and over the years, she worked in Virginia Beach, Va., and Annapolis, Md., helping to deliver babies and caring for new mothers.

"Wherever you go, you can always find a group of people who play old-time music," she says.

Gordon refers to herself as a traditionalist. She favors a lifestyle full of jarred tomatoes and homemade pickles over modern, contemporary life.

"I would live in the 1930s because it was a time when people worked hard for what they had and got their pay," she says. "I think it's so simple and beautiful. ... I like to knit; I like making quilts; I like to can my own tomatoes and make my own pickles. I just really feel like these are things that are just lost in our generation and our culture—we're just, like a quick fix. I draw strength and energy in an old-timey way.

"This is me in my style of poetry and storytelling and writing and playing old-timey tunes."