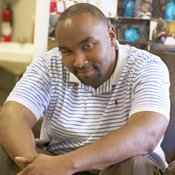 Jackson poet Urban Raw, aka Nathan Harper, is a performer as well as one of the hosts at Suite 106.

Poetry is like oxygen to Urban Raw, The Ugly Poet and Merc B. Williams.

"God gave John Henry the hammer, and He gave me the pen," says Herbert Brown, 32, lyricist and poet, also known as The Ugly Poet. He is the author of "Beautiful Thoughts from The Ugly Poet."

To this trio, poetry is not just lines and rhymes; it is a binding substance that forms their friendship, a form of expression and a way of life.

"Whether it's a poem or telling jokes—to me it's just for the love of the art itself," says Kelly Nash, 30, who works as a specialist at C Spire Wireless. His stage name is Merc B. Williams.

For a while, Merc traveled from Hattiesburg to Jackson just for the poetry. "That was my way of expressing myself," he says. Merc adds that he's not sure what it does for others but says, "I appreciate the art of poetry."

Merc describes performing in the terms of an addiction. "It's like a drug," he says. "When I get that mic—it's on. It's like an out-of-body experience."

Poetry at Suite 106 functions the way a family does. Urban Raw, the administrator of the open mic, The Ugly Poet and Merc B. Williams are all hosts at Suite 106. They offer constructive criticism and support to other poets so they can hone their creative skills.

"If you're going to do something, you have to do it in a way that it's respectful to the audience" says Nathan Harper, 27, also known as Urban Raw. "In all these other cultures in the old days, to be a poet was something sacred. It was a divine job. You prayed over your pen; you prayed over your paper—you were that sacred."

Gil Scott-Heron is one of many poets who inspires The Ugly Poet, and he admits to memorizing Shel Silverstein's poems before his own.

"All it is, is just human expression," The Ugly Poet says, "That's all it is. So you're supposed to write about whatever goes on in your mind. How else are people going to know what went on today 20 years from now?"

He listens to Scott-Heron frequently, and says the poet talked quite a bit about what was going on in the '70s from social and political perspectives.

"Poets ... talk about what goes on in a society, the things you're not going to get in text books, the thing that's not going to be mainstream," The Ugly Poet says. "But if you think you just have to talk about love or something tragic, what are you giving to the audience? I don't mean audience as in sitting right in front of you while you're on the mic, I'm talking about people 20, 30 years from now. What are they going to have to say about 2012? That's up to us."

Urban Raw adds, "If you can just be genuine and honest about what you think and what you feel, it's good enough." Urban Raw says he draws inspiration from Langston Hughes, Tupac Shakur and Keno Davis.

To paint all these poets with one brush stroke would not be fair. So, what is in a name? Urban Raw is Urban Raw because he paints realism, he says, colors not too many people can see. The "Merc" in Merc B. Williams is short for "mercenary," and the "ugly" in The Ugly Poet acknowledges that everything is not always peachy. Life can have a grimy taste, he says.

The three poets all have a formula. Urban Raw describes his formula as realism; it's two-toned, rather like day and night. His performance pieces include vulgarity, but his work has been accepted for publication in Jackson State University's literary journal Black Magnolias. His written poems are rich with figurative language and not as crude.

As for The Ugly Poet, his formula is satire. Merc B. Williams' formula is the substance that forms the core of the trio's friendship—the simple love of the art of poetry itself.