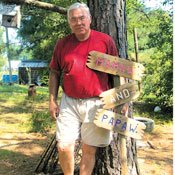 Mention "farmer's market," and thoughts of fresh fruits and vegetables mingled with farm-raised eggs and honey spring to mind. These days, however, markets welcome other local vendors who want to sell their wares, from handmade jewelry to photographs to pine needle baskets.

Cecil Taylor, 58, is the front man for the booth-shop known affectionately as Papaw's Crafts, or in some circles, Papaw's Woodworks. The name is derived from his grandchildren's term of endearment coupled with his specialty: woodcraft in all shapes and sizes. His grandchildren, whom he watches during the day, have nicknames of their own: Grasshopper, Half-pint and Little Bear.

Born June 8, 1952, in Carmack, Taylor and his 11 brothers and sisters moved around quite a bit with their mother and father who farmed all over Mississippi, finally settling in Byram. It was his father who initially taught him about woodworking and carpentry, and it was a skill that he would have to turn to later in life.

"I was in commercial heating and cooling for 36 years," Taylor says. "The first residential job I tried to do in an unfinished house, I fell down a flight of stairs and broke just about every bone in my body—wrists, back, cracked ribs, and now I even have artificial knees. The doctor told me I couldn't even get on a riding lawnmower again, or I would be paralyzed from the waist down."

Taylor went back to work anyway, he says, until the pain got too great, at which point he turned to woodworking.

"I like what I do now," he says. "It's like putting together big puzzles. Anything I see in a magazine I can make in my workshop. I have a lot of tinkerers in my family; four of my brothers are auto mechanics—tinkerers and highway patrolmen."

Papaw's Crafts began when a man clearing out the woods around his house brought Taylor some of the timber. He also reclaims wood and tin from his friends' dilapidated barns and cypress from old, abandoned antebellum homes in the Delta. "The pitted cypress you find in the older buildings really makes for good work," he says.

The craftsman's best sellers are his birdhouses. "I tried painting some of the birdhouses I make, but those didn't sell very well. For some reason, people really enjoy the rustic look. The tin on the roofs is thicker, and it's a lot harder to find."

Taylor doesn't stop at birdhouses, though.

He makes jewelry boxes, wooden gavels and hammers; for the children, he crafts whirligigs, push-ducks and marshmallow guns; for sports fanatics he sells serving trays, footstools and college cutouts, with Ole Miss and Mississippi State his top-sellers. His larger items include cedar chests, coffee tables and larger birdhouses, and he also takes custom orders.

"I can usually finish a cedar chest in a week," he says. "The birdhouses usually take about five hours altogether to put together."

Taylor is now working to expand his market into higher-end goods, including clocks. Although clocks take a bit more time to make because of the small pieces, Taylor  enjoys it. "I still like tinkering,"

Pawpaw's Crafts joined the vendor line-up at the Mississippi Farmer's Market on High Street three years ago, and that's where Taylor mainly sells his goods. He will sometimes make an appearance at a local craft show, and occasionally he sets up shop at the Clinton Farmer's Market (which is open once a month) in the summertime, but only to sell his homegrown tomatoes and corn (even though his grandchildren would love to see him make biscuits full-time).

All other open-market times you'll find him at his High Street booth, talking to customers about his birdhouses and telling the short but epic stories that go with them. You might also find his work at locally owned businesses around the Jackson area such as Huttos.

Taylor plans on staying involved with the farmer's markets "as long as the good Lord lets me," he says.