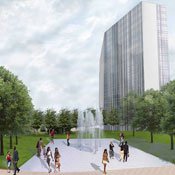 The Jackson Redevelopment Authority is working to finance the initial construction of the Old Capitol Green project this month. Photo by Courtesy Blue Clover

The Jackson Redevelopment Authority is working to finance the initial construction of the Old Capitol Green project this month.

Capitol Street Two-Way
The city will soon begin work to return Capitol Street to a two-way street, after the state Bond Commission's long-awaited Sept. 10 decision to allocate $6 million for construction of water lines under the street. Jackson Mayor Harvey Johnson Jr. is adamant that work on water and sewer pipes should be complete before hammering away at the asphalt above them; he doesn't want to turn jackhammers loose onto nice new concrete months after the street work is complete. The federal government is kicking in $4.8 million for the endeavor, and the Mississippi Development Authority provided $2 million to internalize the exterior entrance ramps for the Parkway Properties parking garage.

New Market in South Jackson
Vowell's Market Place will be opening in the vacated Kroger building at the corner of Raymond Road and McDowell Road by the end of the year. The city of Jackson is a fan of the venture, which will bring 50 jobs and $10 million in sales to the city, according to John Michael Holtmann of Duckworth Realty. The city is willing to invest $50,000 into transforming the building into the latest addition for the Mississippi-based Vowell's family chain of grocers.

The city funds come from the same U.S. Housing and Urban Development grant funds that the city has awarded to smaller businesses for storefront improvement and equipment purchases. Kroger left the facility in 2007.

Historic Farish Street
Farish Street is one month closer to filling your gullet with quality food and spirits, and your ears with melodious sounds. Farish Street Group Media Director Brad Franklin says he still expects five businesses to open their doors in late October in the renovated Farish Street Entertainment District. The district already features the smooth music and heavy food of F. Jones Corner, but will also soon sport a Red Rooster's, Beethoven's, a Cool Al's burger joint and a Hamp's Juke Joint. The district's resort status will doubtless do plenty for this brand of development, although the complications of being able to carry an open container of beer on the street while not being able to carry an open container of hard liquor is causing some confusion, according to patrons.

Standard Life Building
The art deco Standard Life Building now contains 76 luxury apartments, and will soon feature 2,600 square feet of open retail space. The retail space is limited to the ground floor, while apartments reach up to the 18th floor of the building. The occupants of the 18th floor can rest easy, knowing they're sleeping on the same floor that formerly held the office of the police chief during construction of the new Jackson Police Department down the street.

Rainbow Foods goes Co-op
Rainbow Whole Foods Inc., an agricultural association since opening its doors in 1980, became a consumer cooperative on the first of September. The new designation makes stock available for purchase to members at $200 per certificate.

Old Capitol Green
The Jackson Redevelopment Authority is hammering out a bonding plan that will finance the construction of a new $21 million robot-operated parking garage and an adjoining cooling tower that will form the skeleton of the Old Capitol Green mixed-use district along Pearl, Jefferson, Tombigbee and Commerce streets. Developer Full Spectrum South will begin construction on the garage this year in hopes of taking advantage of federal tax credits that expire at the end of the year. The garage, complete with its army of car-parking automatons, should be up and running in 2011, and will likely provide a source of entertainment to city visitors, who will not find another garage like it anywhere in this part of the country.

Phase 1 of the project, according to the memorandum of understanding with JRA, consists of between 180 and 190 residential apartments and 190,000 square feet of space that could comprise business suites and green space. Another 30,000 square feet will house retail and entertainment space.

Cups' Runneth Over
Local coffee house chain Cups claimed the vacated Starbucks building at 1070 County Line Road this month. The building, which is next to T-Mobile, offers a drive-through window and is open Monday through Saturday 6:30 a.m. to 9 p.m. and Sunday 8 a.m. to 8 p.m. Cups Marketing Director Amy Joyner said the new store will announce its grand opening in a few weeks.

UMMC Biotech Research Park
The University of Mississippi Medical Center, already an economic force to be reckoned with in the state, will begin construction on a new biotech research park at the farmers' market on Woodrow Wilson Avenue and West Street. Some members of the old farmers' market are slow to tear up their roots and carry business over to the new farmers' market location on High Street, but UMMC remains confident that they can iron out their differences and begin construction on the facility next year.

The facility could eventually employ up to 1,700 people, and merge university research space with private company rental space. UMMC will begin construction with a 70,000-square-foot office laboratory.

Art Garden
The Mississippi Museum of Art plans a $5 million conversion of the parking lot between the art museum, the Arts Center, Thalia Mara Hall and the Convention Center into a public garden. The area, which will contain scenic foliage and water features, will also boast outdoor performance space. Mississippi Museum of Art Director Betsy Bradley said she hopes to see construction crews break ground on the project this winter.

Sleep-Inn on the Parkway
Sleep Inn is slated to open on the Jackson Metro Parkway this year, even though it missed its original Sept. 1 opening deadline. Defense attorney Robert Gibbs, who is a prominent associate of the company building the hotel—the LEAD Group LLC—said his company managed to snag new financing from an out-of-state bank to complete construction. Gibbs told the Jackson Free Press that the hotel will draw revenue from patrons of the Jackson Convention Center, Jackson State University events, and other public merriment including the expanding entertainment venues on Farish Street.