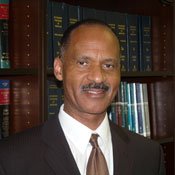 Municipal Judge Ali ShamsidDeen is running for a seat on the Hinds County circuit court.

Jackson Municipal Judge Ali ShamsidDeen is not trying to be a politically divisive figure, but his background as a editor of the Jackson Advocate in the 1990s and an associate of the law firm Lumumba and Freelon, suggests a controversial bent. It's a background that may or may not have had a connection with July reports of a hangman's noose that an anonymous night visitor suspended from a shed on his property.

As a Jackson Advocate editor, you made statements some might describe as anti-white, such as saying that then-Mayor Kane Ditto had a "slave-owner mentality."
Well, keep in mind that those articles were published almost 20 years ago. What may have been true then may not necessarily be true now. All of us who have any amount of intelligence have the power to adapt to the times and the situations we're living in. You have to take into account the context of things that were happening at that time. It was a different world then. My attitude toward Kane Ditto then, for example, may not be the attitude I have toward him and his policies now. I haven't spoken to Mr. Ditto in ages.

What improvements do you want to make to the circuit court?
I think Hinds County gets kind of a bad rap from a judicial standpoint. Jackson has a much larger population, and when you compare crime in Jackson to other places, naturally it'll be higher because there are more people. I also want people to become more educated as to what the court is about. I want people to know that bonds are not supposed to be used for punishment.

What can you do to reduce the number of case backlogs on the court docket?
The judge has some discretion, … but I think the judge's hands are pretty much tied with the way evidence is handled before it even comes to trial. For instance, if a defense attorney is having a difficult time getting evidence for the district attorney's office to build their defense, or the DA is having a difficult time getting evidence from law enforcement, that can keep a case from going to court. ... Judges try to expedite things by sanctioning one side or the other, but nothing is rarely held up because the judge is twiddling his thumbs.

Whatever came of that noose incident in your shed?
I put up cameras and lights, but nothing has happened since the incident. To be honest, I think it was somebody's idea of a practical joke. I don't think anybody was out to be (threatening).

What's your take on drug-related crimes?
There are better ways to take on the drug-related crime problem on a personal level. When a person has an addiction, prison often won't deal with that. Sometimes they'll get involved with a drug counselor in prison, but prevention is the real challenge: catching a person before their drug problems push them into committing a crime. There are drug-intervention programs that a judge can sentence a person to, in lieu of prison and jail time … but it's up to the person to make that decision. Over the last three years, I've had the opportunity to suspend (jail) sentences for people involved in drug crimes for the city and sent them to counseling (instead), and many times that person has never again appeared in my court.

In 2007 you drew criticism for releasing Edward Sudduth without bond after JPD charged him with being a convicted felon with a firearm—a serious firearm violation. What is your response?
The felony charge that he had was 20 years old. During that 20-year span he had married, become a productive person in his community and had no more run-ins with the law. From what I remember, he was stopped at a (police) checkpoint, and a gun was found under the seat of his van. As a judge, I had to look at whether or not this person was a threat to the community. Obviously, he wasn't. Given the nature of the crime he was being charged with, I found it unlikely that he was going to jump bail and flee. ... Should I have treated him like he had slain 10 or 12 people? The law says we are not to look at that person as if they are guilty. And, in any case, my decision had no impact upon his trial.

What makes you worthy of the judicial position?
I'm the candidate in this race who has judicial experience. I was trained under a circuit judge and had an opportunity to work for a circuit court judge in a criminal and civil environment, and I'm the candidate in this race that has three years experience with being a judge and having to deal with the issues, and I understand the pros and cons of discretionary decisions that have to be made.

Regardless of whether people care about being tough on crime, the bottom line I think they are concerned about is having judges who are going to be fair and even-handed with the application of rules.

When is the Q&A with Jeff Weill?

It's scheduled for Monday a.m. to go into the next issue.

Everyone should read those columns he penned for the Jackson Advocate.

I've seen them, Bill. They're vicious. I'm on record as no fan of the "Brown Society" shtick bent of the Jackson Advocate. During my Melton research, I read a lot of Advocate archives, which led me to come out against naming the library after Charles Tisdale. Let's just say there is little wonder that they have a hard time appealing to young people of any race with all the name-calling and under-researched polemics. I've always said they are the other side of the same coin from the Northside Sun with their awards for columns that said blacks should give thanks for slavery. On a different note, I found really interesting old articles about Ed Peters in the Advocate from back in the day -- that seemed pretty well researched. It was interesting being that Mr. Tisdale ended up a big supporter of Melton and his inner circle, which included Peters and Danks. What a city.