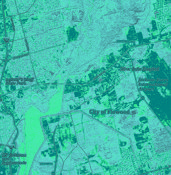 Some lake supporters hope a one-lake plan would replace levees, although levees are still in the mix.

U.S. Rep. Bennie Thompson said federal funding to study building a lake on the Pearl River will not be easy to obtain, despite the U.S. Army Corps of Engineers' renewed interest in the plan.

"Given where we are just in terms of the country's finances, a project of this magnitude would require a yeoman's effort on the part of all parties to get it approved, especially given the fact that the project is still in its infancy," Thompson said this week. "If it gets approved, this will be a major hurdle to overcome."

As difficult as the next step may be, it is an improvement over the project's chances earlier this year, when Corps Project Manager Doug Kamien refused to even enter the lake plan into a federal vetting process.

In September, however, the Corps seemingly reversed itself: "The Corps is happy to consider a single-lake plan and other plans in a feasibility study, if the federal government provides funding for the match," U.S. Army Corps of Engineers spokesman Kavanaugh Breazeale told the JFP last week.

Jo-Ellen Darcy, assistant secretary of the Army Civil Works Division, sent a Sept. 17 letter to members of the Mississippi delegation, assuring them that the Corps was onboard with studying a lone-lake plan, "provided funds to continue the study are included in the fiscal year 2011 Energy and Water Development Appropriations Act. She added that the study will begin "as expeditiously as possible" after the appropriation.

The letter arrived after Rankin-Hinds Levee Board members traveled to Washington to ask the state's political delegation to pressure the Corps to consider the one-lake compromise between Two Lakes and expanded levees. The delegation wrote Darcy in August, requesting the Corps continue an environmental-impact study and a third-party review of the single-lake plan, which is necessary before any flood control project can move forward.

The Levee Board wants the federal government to consider putting a small lake between current levees girding the Pearl River alongside Jackson. Kamien previously opposed any lake plan, saying it unnecessarily posed a threat to the wetland environment along the Pearl considering that a less environmentally harmful levee expansion is possible.

The issue became even more complicated over the last few years as Levee Board members battled over the potential size of the proposed lake. Jackson representatives on the board, including businessmen Leland Speed and Socrates Garrett, had long advocated for oilman John McGowan's ambitious two-lake plan, which could engulf portions of LeFleur's Bluff Park and tie flood control up in legal wrangling for decades, while other members pushed for a smaller lake plan or a simple levee-expansion plan with less negative environmental impact for the sake of expediency.

Speed told the JFP that he still wants the two-lake plan, but said the upper lake portion—which is not a component of the single-lake plan—will be able to stand on its own merits at a later time, after the development of the first lake. McGowan has said publicly that he now supports the one-lake plan because he can turn it into his Two Lakes vision later.

There seems to be confusion, however, over whether the one-lake plan would be developed alongside the expanded levees the Corps is pursuing. Strident Two Lakes supporter The Northside Sun reported last week that the plan would replace the levees, allowing McGowan to add his second lake later. But the June 2010 map released by one-lake designer Barry Royals indicated a levee expansion would be part of the one-lake mix. If so, it would seem to kill the possibility of a future expansion into McGowan's two-lake vision.

With the Corps now willing to study the one-lake proposal, the next potential block is the funding. Breazeale could not say how much the project study would cost, but the Levee Board must come up with funds for half the cost, with the federal government kicking in the other half. Thompson said the federal government must include funding for its half of the study in an appropriations omnibus bill "that would come out in November or December (of next year), if it is included at all."

"If they're trying to get money for next October, they have to start by March of next year, and that (push) would have to come from the Corps. Them saying they're waiting for money from Washington ... isn't enough," Thompson said.

Jackson Mayor Harvey Johnson Jr., also a Levee Board member, said last week that he was unwilling to guess at the chances of funding the study, but had known of many Corps endeavors that never received congressional funding. "I think the important take-away message of the story is that now we have some movement to get the Corps to look at the one-lake option as a meaningful option for flood protection and economic development and recreational use and environmental sustainability," Johnson said.

Thompson added that even if the federal government matches the cost of the analysis, the lake must still survive the vetting process. "The Corps still has to look at cost-benefit ratios and a host of things going into the effort," he said. "Looking at it doesn't mean it will ultimately happen."