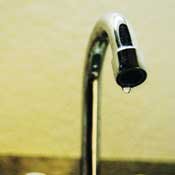 The city of Jackson is eyeing water and sewer fee hikes this year.

Jackson City Council will address fee increases of 13 percent for water and 6 percent for sewer services during Tuesday's city council meeting. Jackson Mayor Harvey Johnson Jr. proposed the hikes for residents and businesses in August for the city's 2011 budget to shore up a decrease in sales-tax revenue.

The mayor called the increase "modest" during his August budget address to the city council, and said it "would amount to a $3.08 increase per month for water and a $1.32 per month increase for sewer for the average residential customer."

"That's just over $52 a year, or about $1 per week," Johnson added. The mayor is also proposing to install modern city-wide water meters over the next few years to shore up revenue, as the new meters will automatically monitor individual water use throughout the city.

Ward 7 Councilman Tony Yarber said he was unhappy with the fee increases, but considered them "a necessary evil" to keep the city's budget balanced.

Meanwhile, Ward 1 Councilman Jeff Weill, who is leaving his council seat in January for a judicial seat in Hinds County Circuit Court, said he does not welcome the increases. The councilman said the fee hike would be unnecessary if the city would instead cut unnecessary services in other sectors.

"[T]he budget is bloated and continues to pay for tennis courts, half a million dollars for golf courses, tens of thousands of dollars for feel-good trophies for the kids, lavish benefits for city employees, and I'm concerned for the taxpayers of Jackson," Weill said in September after the council approved the budget.

City spokesman Chris Mims said, however, that the city plans to put the rate increases to work with positive proof of water-sewer upgrades in 2011.

"The city is preparing to submit contract requests to (engineers) to assess the water lines connected to state buildings that most need work," Mims said.

The city and state erupted into bickering this summer when the Mississippi Bond Commission refused to sign off on an interest-free $6 million loan to the city to finance the replacement of its aging pipes that led to multiple water failures earlier this year. Pipes froze and burst in January, leaving the state Capitol and many government buildings with no water.

Legislators, faced with the prospect of non-working toilets, hastily passed a bill supporting the $6 million loan to replace water lines crucial to state buildings. But the commission initially delayed its approval of the bond in July. Commission members State Treasurer Tate Reeves and Gov. Haley Barbour said the city needed to first provide a detailed plan on what water lines will benefit from the money and what the city plans to do with remaining sub-par pipes not covered by the loan.

Facing outcry from city representatives, the Bond Commission relented and approved the loan in September, but the city is just now using the money to hire a contractor to assess which pipes need to benefit first from the funding.

Mims said the city will soon reach an agreement with owners of Mule Jail property in north Jackson, who dispute the city's need to bury a 54-inch line on their property, rather than running the line on adjoining city property.

In June, the critical 54-inch water main near the city's O.B. Curtis water-treatment plant—which was still waiting for the Mule Jail line to connect it from the Pearl River levee—blew off what was designed to be a temporary cap. The rupture dumped thousands of gallons of water into the soil, reduced city-wide water pressure and set off a boil-water alert for the second time this year following the winter freeze.

The failure proved a major embarrassment to the city, and prompted a decision by the Department of Transportation to dig its own well to supply water to several critical state-government buildings.

Johnson said in August that the city could have avoided both massive water failures this year had Mule Jail owners not stalled construction of the 54-inch water main linking the city's two water-supply plants.

Jackson Realtor and Mule Jail Club President Bob Ridgway said last month that the city had refused to work with landowners in the area: "What we have asked them to do is put the line parallel to our road, instead of in our road. We've made that request two years ago, but nobody has ever explained to us why this won't work," Ridgway said. "It won't change the trajectory, and it's on land already owned by the city."

Mims said the city pushed for the installation of the pipe upon Mule Jail property because the land was flat compared to the neighboring city property, and that installation upon the city property could incur extra cost. Deputy City Attorney Terry Williamson said the city was preparing to put before the council an order authorizing the condemnation of the targeted Mule Jail land, but Public Works Director Dan Gaillet said last week that the city was working with landowners to work out a solution before involving the courts. He indicated Monday that the solution may conform to some Mule Jail demands.

Mims said he was confident the city's two water plants would be effectively linked before the end of the year, reducing the chance of future pipe ruptures decreasing water pressure to the point of shutting down the water system.

He added that the city would also finish work on a water-supply system in south Jackson, along Highway 18. The construction, financed by a bond the city issued in 2006, will connect the neighborhoods south of the Maddox Road junction with the city's municipal water supply.

"It will allow the residents in that area to move off the well system they're still using down there," Mims said.

Virden Addition Neighborhood Association President Jimmie Robinson said the city was desperately in need of water and sewer upgrades, but said the fee hike would have an impact on the senior-citizen population, many of whom live on fixed incomes.

Reporter Adam Lynch reported in a previous version of this story that the city would use fee increases to fund water and sewer upgrades. There is no connection between the upgrades and the fee hikes. Council-approved bonds fund the brunt of upgrades. In the same story, city spokesman Chris Mims said that he was confident the city's two water plants would be linked before the end of the year. Mims said that the two plants would be on their way to being linked before the end of the year, believing the city can work out its issues with landowners before January.

Wow...all of our bills continue to rise. I understand the need for replacing the aging pipes, but I figure that the raising of this money should have been done during the "good" years and not during an economic recession.