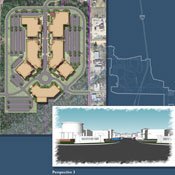 Pictured is a proposed CMPDD development along the Hwy 80 corridor. Jackson Mayor Harvey Johnson Jr. wants to change the area's zoning to promote such mixed-use developments.

Jackson Mayor Harvey Johnson Jr. said he will propose a zoning change and improved code enforcement for the Highway 80 corridor to promote new development in the city.

Highway 80 is a long stretch of highway that was once a major transportation route before Interstate 20 was built. The decaying area within the city limits begins at Rankin County border to the east and the city of Clinton to the west, and contains numerous zones, including industrial, commercial and residential.

Johnson, working under the recommendations of the Central Mississippi Planning and Development District, wants to create a new class of zone combining multiple mixed-use developments, called the Highway 80 Mixed-Use District.

The district would restrict construction of new industrial developments from commercial or residential areas. Johnson said the new zone would not eliminate industrial-style businesses entirely from the district, however: "Just because we've re-zoned an area doesn't mean you can't take a use that's been there since day one and do away with that use," Johnson said. "Generally people don't like change. We'll have to have public hearings and address the concerns of citizens and businesses, so I don't want to prejudge any of the businesses or the residents, but they'll have an ample opportunity to address their concerns."