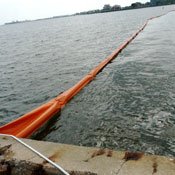 BP is still attempting to contain the results of an April 20 explosion using float booms, but NOAA has imposed a fishing ban that extends beyond the Florida panhandle.

The National Oceanic and Atmospheric Administration announced Tuesday that it is expanding the ban zone on fishing in the Gulf to about 20 percent of the entire Gulf as a result of the continuing jet of oil erupting into the ocean floor off the coast of Louisiana.

British Petroleum's Deepwater Horizon exploded April 20, killing 11 people and triggering an underwater geyser of oil 5,000 feet below the ocean, which continues to spew an indescribable amount of crude oil into Gulf waters. Early estimates put the daily eruption at more than 210,000 gallons of oil a day, although NOAA stopped attempting to log the amount due to the unreliability of data.

The administration outlined an ever-expanding fishing ban that already extends south of the Florida panhandle and now creeps toward the placid waters of the Florida peninsula and Key West.

Marine scientists say the spread of the oil may be facilitated by BP's use of detergents to break up the oil, and fear for the future of the Gulf's coral reefs.

"The oil companies are making a judgment call on a trade-off on which ecosystems to sacrifice: the shoreline and surface animals or the water column," Sandra Brooke, coral conservation director for the Marine Conservation Biology Institute of Bellevue, Wa., said.

"It's partly a PR exercise, because no one wants to see this nasty stuff globbing up onshore, but with the amount of oil, you're not really trading anything off. Both ecosystems will get hit."

BP's efforts to disperse the spill have netted a significant decrease in the amount of surface oil riding the waves to Gulf state beaches; however, Brooke told the Jackson Free Press that BP's use of almost 600,000 gallons of a dispersant, both on the surface and injected directly into the well, virtually insures that the oil will break its habit of floating and travel directly through the sea-water all along the Gulf. Bacteria feeding on the oil could consume all the oxygen in the water and create widespread incidence of dead zones comparable to the seasonal zooplankton dead zone near the mouth of the Mississippi River.

The dead zone could envelope delicate coral reefs as far as Florida Keys' National Marine Sanctuary and Texas, but Brooke said an even more extensive deepwater reef spanning the Gulf could ultimately feel the impact.

"The problem with inserting dispersants at depth is that the most well-developed deepwater coral system we know of in the Gulf of Mexico is less than 100 kilometers up the shelf from (the massive leak). Nobody has been considering the effects of that dispersed crap on the real deep-water corals," Brooke said. "I've worked extensively on the deepwater system. We're going back there in September, and I'm a bit concerned with what we're going to see."

BP made its legal commitment to the oil damage last week. The company put in writing a list of vocal obligations to attorneys general from five Gulf states, including a commitment to quick claim assistance to fishing and tourist industry workers affected by the oil; a second commitment to waive a $75 million cap on liability and claims from the Transocean/Deepwater Horizon deepwater oil rig; and an agreement to dismiss contracts signed by boaters and fishermen BP paid to participate in the company's clean-up effort that prevented them from filing lawsuits over the spill.

"BP intends to take responsibility for responding to the MC 252 spill," stated BP attorney John E. Lynch in the May 10 letter.

Brooke said she feared the poisonous dispersant/oil mix travels more easily with the east bound Gulf current, and doubted the legal claims against the company would ultimately counter the extensive amount of environmental damage.

The Gulf Restoration Network and the Sierra Club carried the fight to the U.S. government on Tuesday, filing a May 18 suit in U.S. District Court, in New Orleans, against the U.S. Minerals Management Service for exempting oil companies drilling in the Gulf of Mexico from disclosing blowout and worst case oil spill scenarios.

The suit maintains that law requires the Minerals Management Service to include blowout and worst-case oil-spill scenarios before approving offshore drilling plans, but that MMS approved the Horizon rig without this step.

"The basic problem here is that the Minerals Management Service tried to change the law without telling anybody," stated Sierra Club attorney Robert Wiygul in a May 18 press release. "That's bad policy, and the BP mess proves it's a disaster for the environment."

The suit asks the court to not only invalidate MMS' practice of removing compliance requirement but orders a review of existing offshore drilling plans that do not comply with existing rules. The suit was filed in federal court in New Orleans.