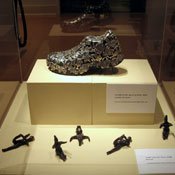 Claudia DeMonte's "The Luxury of Exercise" collection features more than 50 pieces of artwork.

The catalyst for New York artist Claudia DeMonte's art is a perfect balance between the internal world of ideas and the external world of possessions. Through her collection, "The Luxury of Exercise: Small Sculpture and Works on Paper," she not only expresses the struggles of women but also their blessings.

The collection features more than 50 pieces of artwork including small, carved sculptures such as cell phones, pocketbooks and running shoes with small pewter charms nailed to each of them. The works stem from her growing interest in the role of women in society, she says.

DeMonte, born and raised in the Astoria area of Queens, N.Y., recalls growing up during a pivotal time during the women's movement, and believes that the change in culture during her coming of age made her more aware of women's roles in society including her own.

The year 1974 was an important one for DeMonte and the women of America. That year the United States celebrated it's first Women's Equality Day. Though DeMonte celebrated women's liberties in the United States, such as the freedom to have a career and rights increasingly equal to that of men, it was in the North African country of Tunisia where she witnessed women in unimaginable conditions.

"There was a man on a donkey with his wife in front of him carrying all the packages on her back. He was hitting her to go faster," she recalls.

Such scenes were shocking to DeMonte. It was hard to fathom that while women were obtaining more rights in America, in other parts of the world they were reduced to beasts of burden.

"The more I traveled, the more I saw how different the world is from place to place. Our way is only one way," she says.

Her observations and experiences helped DeMonte to see that in many other parts of the world, women perform strenuous, laborious tasks daily, while men serve more domestic duties. Meanwhile, the majority of western women didn't necessarily experience such physical labor on a regular basis. The roles were often reversed.

"While in Africa, the women worked so hard in the field that I realized they didn't need to stay in shape" DeMonte says.

DeMonte was compelled to make a collection of artwork that examined exercise and whether it is purely labor or luxury. The artist says that only in a country like America, where citizens suffer from diseases of abundance such as obesity and diabetes, are industries centered around staying in shape, from gym memberships to workout apparel.

"In most of the world, women do not have the luxury of exercise because they work so hard," she says.

DeMonte's work in "The Luxury of Exercise" demonstrates the luxurious side of the equation: Each sculpture is covered in pewter to create a lush and extravagant feel, while adding a touch of femininity. She even has exercising figures wearing jewelry.

DeMonte says the world of gyms has become extremely "fancy." "I've been to the gym where people have had on so much jewelry I was amazed that they could raise their arms," she says.

Her work is an indication of her political, yet witty and playful approach, with the perfect combination of content and concept.

As for her artistic expression and intention, the artist hopes that whoever observes her art will enjoy it for its aesthetic attractiveness. Still, she wants people to remember that they are lucky to be able to afford gym memberships and have the need to exercise.

"Even I complain about the need to exercise to stay in shape," DeMonte admits. "But I have to remind myself that it is, actually, a blessing and a luxury.

Beautiful article. Thanks. As an aside, but on point, when a woman experiences serious health issues that confine her ability to move, exercise takes on a new deliciousness that she often, then, salivates for. Jackie Warren Tatum P.S. Todd & Donna. I don't know how to change my screen name for posting here from J.T. to Jackie Warren Tatum. If you can do it, please do it for me in order to honor your recent comments about full disclosure of who is speaking, with which I totally agree, by the way. ;)