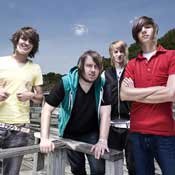 Jackson-based pop-punk band At Cliffs End recently released their first EP, "The City," and are working on a new album in Nashville.

The members of Jackson-based punk-pop band At Cliffs End know how to go through vans. In the less than two years since the band formed and began touring, the group has seen one burn due to wiring problems, another destroyed when they collided with a tree, and a third is currently under repair. But, fortunately, the young musicians also know how to create sharp guitar riffs, strong lyrics and growing crowds.

At Cliffs End formed in 2007 and consists of Wood Simmons (bass), Reed Bradford (guitar/vox), Micah Boyd (vocals/guitar) and Hayden Boyd (drums/vox). Micah, 20, had played in bands with Bradford, 17, and met Simmons, 17, on the Internet, but the band still needed a drummer. Turns out, the missing link was right in front of them. Micah's 17-year-old brother Hayden was always into drums, but it wasn't until a spontaneous jam session that the musicians made a musical connection and Hayden became the new drummer.

This year, the band released their first effort, "The City" EP, which made Smart Punk's Top 100 CDs list at No. 92. They've also shared the stage with bands like Jonezetta, Colour Revolt, The Ataris and Lovedrug, and they've watched their fan base grow with every show.

"Our first performance was at a high-school talent show, and we probably just played to our family and friends. Now, we're playing in front of 300 or 400 kids at a show," Micah says.

"The City" EP is full of bouncy yet sharp guitar riffs and aggressive vocals, in addition to impeccably placed hooks. The band's pop-punk sound clearly has influences such as bands The Ataris, Green Day and Blink 182. Though the sound that Simmons calls "a fiery flaming ball of greatness piercing the Earth's atmosphere at a speed of fancy fantastic knots" can be fast and forceful, lyrical content creates a strong balance.

"We always try to keep our lyrics positive," says Micah Boyd, who is the primary lyricist. "We just want kids to have fun." The band's songwriting process is collaborative with each band member pitching lines and ideas until a song is complete.

Though the EP plays a crucial role in the band's success, touring is also important. Despite scheduling conflicts with school and playing shows every weekend and holiday breaks, the band prefers touring and playing live shows to anything else. They each even have dream tours lined up. While Micah fantasizes about a split arena tour with a hologram Elvis Presley and Journey, Bradford fancies the idea of touring with Blink 182: "That would be the most fun tour I could ever imagine; I'd give body parts for that. I can't say which ones though. Use your imagination!" Meanwhile, Hayden would like to tour with 311, Snoop Dogg and Dr. Dre.

Despite spending so much time together, Micah says At Cliffs End has become more than just a band.

"Before our first tour we had arguments a lot because we'd never spent a long amount of time together," he says. "But being in a van for four weeks straight, you really get to know each other. Now we know what to do to make each other feel better, and how to tick each other off. So that's fun! But we're like a family."

The guys are quick to admit that they still have a long way to go to get to where they want to be. For now, though, they are satisfied. "We'd be happy playing to four or five kids in our backyard," Micah says.

At Cliffs End is currently recording their next record in Nashville and continuing their winter tour. The band will perform at Northwest Rankin High School Jan. 28 at 6 p.m. Visit myspace.com/atcliffsend for more details. "The City" EP is available on iTunes and SmartPunk.com.