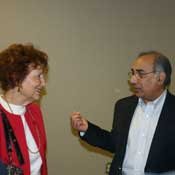 The Mississippi Muslim Association will break ground on a mosque off Highway 51 in Madison next month, following the approval of a 3-to-2 vote by the Madison County Board of Supervisors today.

After nearly a year of delays, supervisors verified the onsite wastewater treatment plant for the 11,000-square-foot facility after getting the assurance of local water supplier Bear Creek Water Association and the Mississippi department of health that the mosque had met requirements for water and sewer treatment.

Supervisor Tim Johnson, who voted in favor along with supervisors Karl Banks and Paul Griffin, only offered his support after the Mississippi Muslim Association assured the board that the building would act only as a place of worship and not contain a health clinic, as previously planned, or use sirens to announce prayer times.

Attorney Roger Williams, who represents the Mississippi Muslim Association, said he did not see any future obstructions to construction.

"We feel the board made the appropriate decision, and we appreciate all the efforts the board has made in this matter," Williams said.

Construction of the mosque stalled last year when the city of Madison backed away from an earlier decision to certify the Magnolia Islamic Center for sewage service by the city. City officials originally believed that area to be within its certificate of public convenience and necessity, but later determined otherwise. The city's abrupt about-face threatened to stop construction of the mosque indefinitely.

Last August, Attorney John Reeves, who represents Madison residents opposed to the construction of the mosque—and who delivered a 400-signature petition opposing the church to supervisors—explained that although the mosque could attempt to supply its own water treatment through an onsite septic tank, Bear Creek may not be able to provide water to the worship facility as long as a wastewater authority is available.

Local resident state Rep. Rita Martinson, R-Madison, said she feared the water treatment plant would not be big enough to accommodate the mosque's 160 patrons, and that it would contaminate groundwater in the area.

"We're asking you to do the right thing," Martinson told the board. "We don't believe any entity should have been given permission to build a private, onsite waste treatment. Bear Creek's own requirements demand that any new construction connect to the public sewer line if the line is available. Are we going to protect the water table in Madison County, or are we going to allow the effluent from wastewater treatment to go into ditches and pollute the water table?"

Johnson made note of Martinson's concern and filed a motion approving the mosque's site plan, with instructions to the board to push the Madison County Wastewater Authority to allow the facility to tie onto the wastewater line. Only two supervisors, John Bell Crosby and D.I. Smith, voted against the motion.

"The wastewater line is only about a thousand feet from the facility, so we don't have to worry about ground contamination," Johnson said. "Some of us are members of the authority, and we should petition the wastewater authority to allow it to tie in. I think that would hopefully diminish some of the argument against the mosque."

Madison resident Alan Henderson, a vocal critic of the mosque who owns property adjacent to the site, could yet not say if residents planned to appeal the decision to Madison County Circuit Court. Mississippi Muslim Association member Mohammad Saleh, who was present for the vote, said the association now expects the groundbreaking to take place in April, and construction to take a little more than a year.

"We're glad the vote went the way it did, although we would prefer to be tied in with the public line. Still, we're glad it's over," Saleh said.

What are the codes for churches in Madison? Do they have a minaret in the design and how tall will it be? That seems to be a sticking point in Europe now prompting some countries to enact limits on spires and minarets.