The Beerin' O' the Green 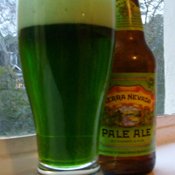 This March 17, as Americans once again celebrate a foreign holiday with more gusto than the originating country, Jackson will run amok with green clothing, green food, green clovers, green men stealing cereal, and most importantly, the green beer of Saint Patrick's Day. But for every local watering hole with its own tried-and-true recipe for green suds, a dozen private party hosts are asking themselves the same question: how to make a green beer worthy of this year's holiday revels.

I decided to personally test six popular ales to find the one that not only takes the strongest shade of green, but also retains that certain Irish heartiness. For this test I chose: Guinness, Smithwick's (pronounced SMIT-iks), Harp's, Killian's, Sierra Nevada Pale Ale and finally (representing America as the control group) the domestic beer Bud Light Lime. (The final selection may raise some eyebrows, but ultimately: (a) The survey needed a yellow domestic beer; (b) lime follows the green theme ... sort of; and (c) screw you guys—I have to drink this stuff, and I like Bud Light Lime!

Once I had the beers, choosing the dye was simple—mainly because Kroger only carries one brand of green food coloring: Kroger Brand Food Coloring. The proposed testing method was also simple—drip three to four drops of food coloring into the bottom of a pilsner glass, add beer, observe color, indulge. I followed this method to reach all of the results below, except where noted otherwise.

My first hesitation about creating green beer dealt with the possibility of things other than beer being stained green—mainly, my lips and teeth. The last thing I need when approaching the fair red-haired lass at my party is a mouth that looks like it just devoured a box of cheap green popsicles. That, and nothing says, "Grab the mace!" like a wide, green-toothed grin. Fortunately, my fears were unfounded—aside from a slight residue left on the glass, I spotted no noticeable staining of the mouth region. I may now grin with impunity.

As with any dye, however, the threat of staining clothing is always present. I didn't test this, mostly because I'm poor and have yet to find a white T-shirt tree. But judging by the residue left on the glasses, I can safely assume that most clothing would more than likely stain if spilled on, so keep that in mind as the guests get schnockered near the nice couch.

Guinness - Due to being a "dark" beer, Guinness took almost 10 drops of dye before it showed any color change—the final color a dark emerald; almost a black. The head did turn a frothy bright green, though, so the overall effect wasn't unpleasant. Naturally, the stout retained its hearty Irish taste because, after all, it's Guinness. However, if two to three drops of dye in a beer leave a residue or a light stain, nine to 10 drops ensure that the wearin' o' the green will be a permanent addition to the wardrobe. So handle with care, me boyos.

Smithwick's - I expected this beer to "green" similar to Guinness, but I was disappointed to find myself staring at a dirty shade of greenish-brown. Needless to say, I tried not to look at this one as I drank it. The Smithwick's still tasted great, but some beers just weren't meant to be green.

Sierra Nevada - This pale ale had one of the most impressive greens of the pack—just transparent enough to catch the light and dark enough not to look weak. As a bonus, I got some cool designs in the foam, too. This one's sure to be a hit among the 25 percent of your guests who actually like pale ale.

Bud Light Lime - BLL held its green well but loses points for, well, being a light beer. Put it this way: While drinking this green beer, a teenage girl commented on how good my wine cooler looked. There's just no coming back from that, gentlemen. It's also worth noting that I used BLL to test the theory of adding blue dye to a yellow beer to create green. Short answer: It doesn't; it creates a country-western song.

Harp's - Another Irish lager, Harp's turned a brilliant green. For whatever reason, though, no head formed on the beer—green or otherwise—despite being poured the same as the others. While I can't imagine that the food coloring affected the foaming, this was enough to make Harp's come in a close second to Killian's. Which brings us to:

Killian's - I expected horrible things from this concoction. Red and green, for those of you who have experimented with creating festive Christmas drinks, do not a nice color make. However, only four drops resulted in a surprising bright emerald. After sitting a while, it did take on a slight brown tint, but otherwise this red beer held its green.

Between the color, the unwavering taste and its underdog status, Killian's takes the title of Best Green Beer of 2010.

There you have it. Enjoy the holiday; partake responsibly; and down a pint for yours truly. Oh, and stay away from the nice couch.