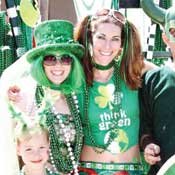 St. Patrick's Day is officially March 17, but in Jackson, the party only starts then, with goings-on around town right through Sunday. Make sure to check jfpevents.com for lots more fun.