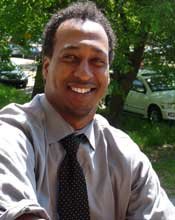 You might see Melvin Priester Jr. around Jackson in his family's law office or working on his father's campaign to become a Hinds County Court judge for Sub-District 1. You also might see him riding his bike (his only mode of transportation), working the door for a local concert, deejaying a party or promoting Cross-Pollinate, a local lecture series he formed to bring artists from various parts of the country to Jackson.

Priester, 31, effectively shirks any stereotypes about being a lawyer. A 1997 graduate of Murrah High School, Priester attended Harvard University, where he received his bachelor's degree in social studies before enrolling in law school at Stanford University. While in school, Priester said he would usually work four or five jobs at the same time.

After receiving his law degree in 2004, he signed on with international law firm Morrison Foerster and practiced financial-services litigation in its San Francisco office.

"Geography matters," Priester says. "That's why it's great to travel. Every place is different, and there are new experiences everywhere."

Priester returned to Jackson earlier this year to work on his father's campaign and to help care for his 101-year-old grandmother, Bernice Stimley. Since coming back, he has jumped headfirst into the local art and music scene.

"People in Jackson are doing some world-class things that they can really be proud of," he says. "A lot of people outside of the South are impressed with some of the stuff that comes from down here. It's been a joy to work in the community."

Priester is actively engaged in the local art and music scene, helping create and promote various projects including "Might Could Right Quick," a unique compilation CD of local Jackson artists. He is also working to take a group of Jacksonians  to Burning Man in August, an art festival in Nevada.

Priester explains that one of his favorite things about being in Jackson is finding ways to develop connections between Jackson and the rest of the world through art.

"I used to think that while in Jackson, I had to make a choice between family and art," he says. "I don't feel that way anymore. There's been a real blossoming in Jackson, and there is a real sense of community. It's like everything is 'we.' There's so much wide-open space and talent in the area. I love it. People are so willing to share."

As for the future, Priester does not see much change in his routine. "I'll probably keep doing what I'm doing," he says. "I'll keep being a recruiter for Jackson to the world."

On June 25, journalist, scholar and DJ Larisa Mann will discuss copyright law and creativity at the Jackson Community Design Center during Cross-Pollinate Vol. 2: Lecture Series at 5:30 p.m. and will deejay June 26 at 10 p.m. at the North Midtown Arts Center.

Its great to hear that Melvin is back in town and ready to promote Jackson. The Priesters have always supported the Jackson community. Thanks for giving us another chance, Melvin.